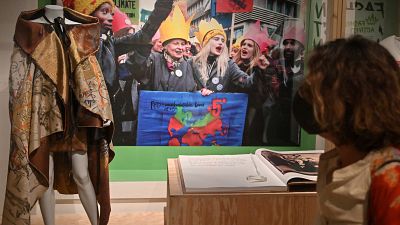 "Art, fashion and subversion" features pieces from the collection of Lee Price alongside the costumes from the Middle ages on display at the largest fabric museum in the world.

"It was quite obvious to make this exhibition here since Vivienne Westwood made reference to a work of the Musée des Tissus, a Charles de Blois garment from the fourteenth century." Julie Ruffet-Troussard, curator of the museum told AFP.

"We were able to make a certain number of connections between our pieces and those of Vivienne Westwood."

Price, who now lives in Lyon, worked in the boutiques of the designer for eleven years and has been a passionate collector of her work since a teenager.

The exhibition features over 200 pieces that trace nearly half a century in the career of the designer, from the Sex Pistols to ecological campaigns and collections that subvert the codes of the English aristocracy or play with the knowledge of the 18th century, the golden age of craftsmanship.

"Vivienne Westwood is eminently modern because she is anchored in the past. She has no esteem for contemporary artists who want to wipe out the past and create from nothing" Esclarmonde Monteil, director of the museum and curator of the exhibition told AFP.

The Westwood mantra “buy less, choose better and make it last” is also something the museum believes in and is a stance that has become even more fashionable during the COVID crisis and has shaken up the fashion world: Louis Vuitton recycles its collections, Gucci and Saint-Laurent have abandoned Fashion weeks and hundreds of more houses have committed to producing less, reducing travel and revisiting collections.

"Vivienne Westwood encapsulates everything, it doesn't matter whether it’s punk, new romantic, whether it’s tailoring, couture. I think every sort of genre, Vivienne can relate to, her clothes can relate to." Price told AFP.

The exhibition runs until January the 17th at the Musée des Tissus.

How Vivienne Westwood wants to bring down consumerism and the ‘Rot$’

Westwood faithful to her punk self on Paris Fashion Week runway