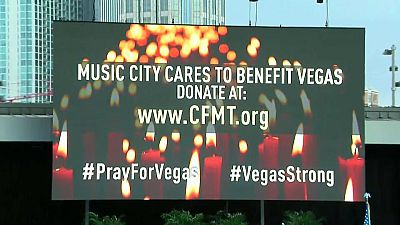 Celebrities have been reacting to the worst mass shooting in modern US history.

In Nashville, Tennessee, a host of stars performed at a candlelit vigil on Monday for the victims of Sunday night’s massacre in Las Vegas.

Many from the world of entertainment, including country music singer Jason Aldean who was in the middle of his set when Stephen Paddock opened fire from the 32nd floor of the Mandalay Bay hotel, took to social media to express their horror.

Along with offering messages of love and support, other celebrities like Ariana Grande, whose Manchester concert was bombed, and Lady Gaga called for for tighter gun controls.

My heart is breaking for Las Vegas. We need love, unity, peace, gun control & for people to look at this & call this what it is = terrorism.

Prayers are important but SpeakerRyan</a> <a href="https://twitter.com/realDonaldTrump?ref_src=twsrc%5Etfw">realDonaldTrump blood is on the hands of those who have power to legislate. #GunControl act quickly. https://t.co/bXZQ7enuEp

Late night talk show host Jimmy Kimmel, who is from Las Vegas, also made an emotional plea for tighter gun laws in the US.