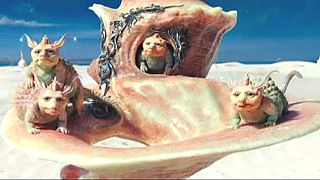 Luc Besson’s new sci-fi movie “ Valerian and the City of a Thousand Planets” has had its European premiere in London. With a budget of over €150 million ($180), it’s one of the most expensive indie films ever made, and certainly the most expensive French film.

But the movie, which stars Cara Delevingne, Dane DeHaan and Rihanna, earned only €14.5 million ($17 million) at its opening week end in the US, with EuropaCorp, Beson’s production company, closing down 8.31 percent Monday in trading on France’s Bourse.

The financial pressure for EuropaCorp is high; last year it had a string of box office flops and recently announced a reported annual loss of €120 ($136 million.)

But Luc Besson is so far not disappointed by the box office results. “We’re number one in five countries already,” he said, “so – it’s definitely not an American film. There’s no superhero, no (inaudible) so I’m not very surprised.”

While EuropaCorp’s exposure on Valerian is somewhat limited, as the film was largely financed by presales in 120 countries, it still doesn’t bode well for the long-term strength of the company.

In the past Besson’s sci-fi movies like The Fifth Element and Lucy were huge commercial successes.

‘Valerian and the City of a Thousand Planets’ is released across Europe this week.