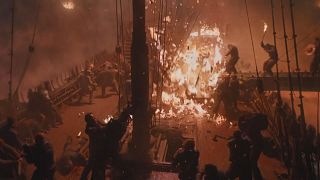 Sharpen the axes the seventh series of HBO’s Game of Thrones goes to air this Sunday and the question on everyone’s lips is who will end up sitting on the iron throne.

The cast gathered in LA for the world premiere ahead of the final, breathtaking, 13 episodes, which will feature unspeakable acts of violence and gore and be very unlucky for many.

Sansa Stark and Jorah cranked up the anticipation.

Game of Thrones: 5 things to know before Sunday’s premiere https://t.co/auJ12JmOpGpic.twitter.com/BW8TB0PueH

That just says it all! Looking forward to Sunday GameOfThrones</a> <a href="https://twitter.com/HBO">HBO#WinterIsHerepic.twitter.com/aAdXWLKgHL

Iain Glen plays the role of :“Things are definitely catapulting forward towards the endgame now. We know that in 13 hours, or roughly, of screen time, things are going to conclude in whichever way they do.

Will a disheartened Sansa Stark get the Iron Throne in Game of Thrones season 7? We asked Sophie Turner: https://t.co/cSAApH3Z3Npic.twitter.com/VVejSFrgJR