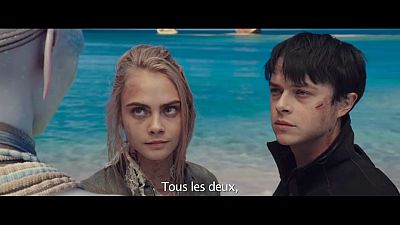 Luc Besson owes some obvious stylistic debts to Star Wars in his new sci-fi film “Valerian” but the inspiration actually came from the French “Valerian and Laureline” sci-fi comics which the director fell in love with as a boy.

Introducing a brand new multi-million dollar intergalactic adventure film during a summer box office season dominated by superheroes and sequels may be considered a big risk to take by an independent filmmaker.

But Besson was so confident in his vision that he took his script and sketches to buyers at the Cannes Film Festival three years ago with the hopes of securing funding for the $150 million project.

“They all raised their hands because they loved the script so we had almost 90 percent of the funding in one day,” Besson told Reuters.

Set in the 28th century where humans and aliens have found a home on the space station Alpha, “Valerian and the City of a Thousand Planets” follows two space agents, the cocky Valerian (Dane DeHaan) and the spirited Laureline (Cara Delevingne) trying to uncover the origins of a mysterious force.

They journey through the different environments and diverse population of Alpha, known as the city of a thousand planets where species include sea monsters and organic robots to winged reptilians and thuggish bug-eyed ogres.

The film comes out in theatres on July 21 and is the fruition of Besson’s nearly 50-year obsession with the comic strip he discovered at the age of 10, setting him on a path to make films such as “The Fifth Element” and “Lucy.”

The stakes are high for Besson’s EuropaCorp film studio as “Valerian” enters a box office saturated with superhero films such as “Wonder Woman” and “Spider-Man: Homecoming” and sequels such as “War for the Planet of the Apes” and “Despicable Me 3.”

Still, the director didn’t consider it a gamble.

“You take risks when you do a first-time director movie at $8 million and no cast. That’s a gamble,” Besson said, adding that Valerian’s theatrical rights had already been bought across nearly 120 countries.

Early reviews for the film have been mixed, with critics praising the vibrant visuals but criticizing the plot and performances.

But Besson believes the audience will determine the success of the film and future installments.

“I wish they love the film because I’m dying to make another one because I love Cara and Dane,” he said.