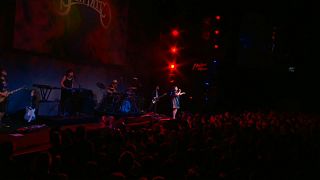 The 51st edition of the Montreux Jazz Festival has been playing host to an eclectic mix of music.

Among the highlights was Beth Ditto, formerly of indie rock band ‘Gossip’ and now flying solo.

She performed at the festival on Monday July 3 as did British pop veterans the ‘Pet Shop Boys’.

The stars even bumped into each other backstage.

We both loved meeting Beth Ditto after our show in Montreux tonight! Neil x #PetTextpic.twitter.com/EYjC57jNqW

Arkansas-born Beth Ditto struts back to her Southern roots with songs about identity and family on her solo debut. https://t.co/G3OyVlGdNCpic.twitter.com/YLCvmQfHOd

Legendary band ‘The Roots’ gave some hip hop groove to the summer showcase in Switzerland.

And singer songwriter Kevin Morby from Kansas City, Missouri has been promoting his new album City Music at Montreux, where the Jazz Festival continues until July 15.

Among the performers yet to grace the festival’s stages are Macy Gray, Tom Jones, Bryan Ferry and Brian Wilson from the Beach Boys.