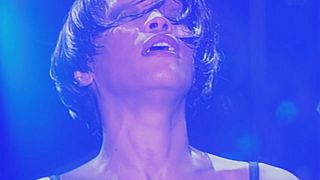 The turbulent life and tragic death of Whitney Houston are the subject of a new documentary.

“Whitney: Can I Be Me” is not just a must for fans of the pop superstar but it is also a penetrating insight into the price of fame.

As a child, Houston sang in a church gospel and soul choir with her mother, Cissy Houston. But her early years were also difficult.

“She loved her brothers but they both had drug problems,” said documentary director Nick Broomfield.

“Her mother was barely around because she was touring. She actually was backup for Elvis for some time. So she was mainly raised by her father who she was incredibly close to and, you know, she grew up in a pretty tough area.”

But throughout her troubles, Houston showed courage

“She was just so brave and such a fighter. You know, when you see her singing those things, she’s kind of like a gladiator out there, sweating and pushing it out there and I think you can’t help but love her.”

Interviews and previously-unseen footage capture the rise and fall of surely one of the greatest singers the world has ever seen. Highlights include scenes of Houston during her 1999 world tour, filmed by Rudi Dolezal, credited as the documentary’s co-director.

Houston won six Grammys, 30 Billboard awards and 22 American Music Awards in her career. Her best-known songs include “Saving All my Love for You,” “I Wanna Dance With Somebody” and “My Love Is Your Love.”

Her movies included “The Bodyguard” in 1992 with Kevin Costner, “The Preacher’s Wife” with Denzel Washington, and “Waiting to Exhale.”

She died in February 2012 on the eve of that year’s Grammy Awards ceremony. Authorities said cocaine abuse and heart disease contributed to her death.

“Whitney: Can I Be Me” is on cinema release and is being shown in various documentary film festivals. It will soon be released on DVD.