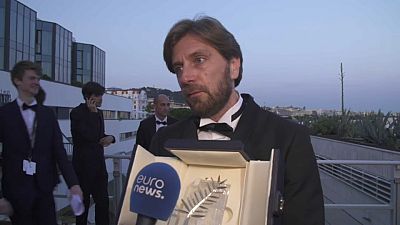 The art-world satire ‘The Square’ wins the prestigious Palme d’Or at the 2017 Cnnes Film Festival.

The movie directed by Swede Ruben Östlund plots a museum director desperate for his gallery to succeed:“We were quite late to send the film to Cannes, so it took a while before we’ve got the message we were in competition and right now when you were sitting down there with all your friends and all the people you are working with for many years to make the film, it can be better, if you are a filmmaker, it can be better!”

Ruben Östlund’s The Square has just won the Palme d’Or at #Cannes2017 – see it on 16th August at #Film4SummerScreen: https://t.co/CqusAzJTNfpic.twitter.com/9PQzzPUY4Y

Diane Kruger’s performance in ‘In the Fade’ won her the best actress prize.

She plays a woman seeking justice following the neo-Nazi killing of her husband.

Although the film failed to impress the critics her acting won her rave reviews:
“She is a victim, cause she is loosing her family but she refuses to give up. There is a strength in Katia, my character. Frankly, I was ensure I had in me and Fatih saw and he helped my hand, helped me through this”

Fred Ponsard is in Cannes for Euronews:
“The Square is a grisly Swedish comedy, which claimed the Palme d’Or at Cannes. The Grand Jury Prize went to Robin Campillo’s ’120 beats per minute’ a big favourite, Diane Kruger got best actress and Joaquin Phoenix
picked up best actor for his role in Scottish director’s Lynne Ramsey film ‘You Were Never Really Here.’”