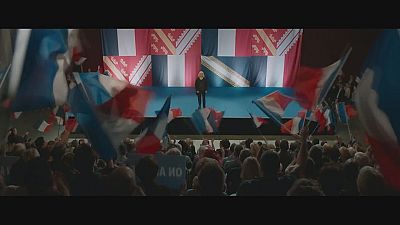 ‘Chez Nous’ is the new film from Belgian director Lucas Belvaux, set in the north of France, and is a very timely release bearing in mind the upcoming French presidential election.

The movie – which goes by the English name ‘This Is Our Land’ depicts the ups and downs of a far-right party during an election campaign, a party that looks strangely like the French Front National.

“Everything is inspired by reality, and we have tried to be faithful and accurate. The only fiction is the character of Pauline, well, all the characters are fictitious really, because they are not real people, even if they are all inspired and motivated by very real situations,” says Belvaux.

One of the FN’s leaders reacted on Twitter to Belvaux’s film. He says he was wrong to criticise it as it’s perfect propaganda for the FN, as it reveals Belvaux’s “class contempt” for the typical FN voter.

In the film Pauline is a nurse, looking after her father at home, and a single mum with two children. One of the town’s most prominent citizens, a family doctor played by the great French actor André Dussollier, manipulates her so that she stands as a candidate for his party, the Patriotic Bloc, whose president, Agnos Dorgelle bears a striking likeness to Marine Le Pen.

Pauline is played by Emilie Duquenne

Lucas Belvaux justifies his making a film attacking the extreme right-wing party, because he says he wants to show the mechanics behind manipulation.

“It’s not an anti-FN film in the sense that I go in with all guns blazing and exaggerate everything,” he says. “It’s a sort of accurate, truthful snapshot of where the party is today, in terms of its organisation, the way it operates, and, yes, how it manipulates both individuals and the masses”.

Pauline allows herself to be talked into becoming a candidate and gradually gets into the swing of the campaign, even as she feels a vice tightening around her. She stands in good faith for the job of Mayor of Hénard, a commune whose name is similar to the commune in the north of France, Hénin-Beaumont, that was won in 2014 by the Front National.

“Populist parties need to go in search of their electorate, like Pauline does. She is one of the people, and is popular because of her commitment. Pauline is the ideal target, and she is easy to manipulate,” says Belvaux.

“She has the will to want to bring about change. She does this every day with her father who she cares for, her children, and her patients. She is someone who gives a lot of herself and is generous, and the party will seek to subvert that generosity to its own advantage.”

The film is out now in France and will get Europe-wide distribution, in a year of key elections also in the Netherlands and Germany, among others.

The robbery of the century in three steps. Step one, defraud the EU parliament of 340,000 euros, step two, become president of France, step three, take France out of the EU…