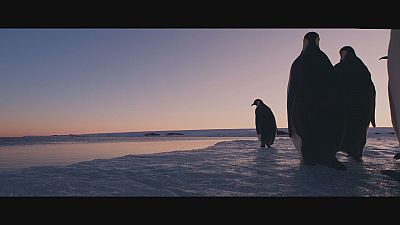 It was 12 years ago the plight of the emperor penguin and the daily struggle to protect its chicks caught the imagination of a worldwide audience.

The film ‘The March of the Emperor’ earned Luc Jacquet the Oscar for Best Documentary in 2006. Now he is filming a new chapter in the life of the penguin.

#Antarctica 1:30pm, by sharing his heat, emperor penguins survive the wind and the cold pic.twitter.com/q1VwHwmQna

Euronews met with the renowned documentary maker at the Antarctica exhibition at the Musee des Confluences in the French city of Lyon.

“We went on the expedition called ‘Antarctica’ last year and made it specially for this museum. It dove-tailed with the fact that I wanted to go and see the hidden face of the emperor, that is to say the universe of the ocean which we could not film when we were making ‘The March of the Emperor.’ This time we filmed in 4K which created these incredible images.

“And this time I had the feeling of knowing a little bit better how to tell the story and I wanted to do it with the know-how I have today,” he explained.

For this documentary there was underwater filming while in the first one we only saw a few seconds shot from the surface.

“We had a team of five divers who went down to a depth of 70 metres,” continued Luc Jacquet. “That was a world-first. No one had dived so deep in the Antarctica. We discovered the absolute grace of the penguin in the depths, that perhaps is not news but the quality of these ‘submarines’, the colours, they are absolutely incredible creatures.”

This film is above all a testimony on the need to preserve the environment while in Antarctica the effects of global warming are paradoxical.

“It’s totally against intuition. Today we have a much larger ice pack in Antarctica than expected. The scientific explanation for this is that there is a tremendous amount of freshwater melt coming from the Antarctic continent. It freezes at zero degrees while sea water at -1.8 degrees.

‘In this absolutely sublime environment with this creature which is not afraid of you, which is familiar you say to yourself: ‘I cannot let it be neglected. I want my children and their children to enjoy them’.

“That is almost an emotional response but we as humans will only be able to live on this planet if it works. All human beings are meshed together. Undoubtedly we are the ones who are going to suffer and paradoxically Antarctica is part of the whole that we need to protect,” he concluded.

‘The Emperor’ is now screening in cinemas in France