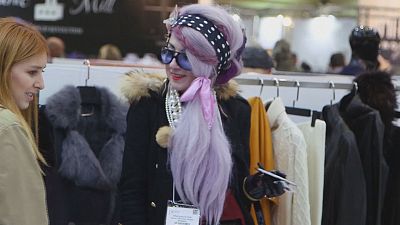 It was bold, brave and beautiful and ‘Pure London’ The annual retail fashion show is vital to the UK fashion industry. It was the first gathering of buyers, sellers and fashionistas since the vote for Brexit.

We had such a great day exploring #purelondon and learning a thing or two. #ladiesfashion#patterns#prints#trendspic.twitter.com/6fiLTXzRnk

Has it knocked the colour out of the fashion industry? Maggie Song studied fashion in Beijing and came to the UK 13 years ago. She founded three labels with outlets in some of the UK’s largest department stores. The news of Brexit knocked her sideways.

“I was shocked. I couldn’t think anything and also I couldn’t speak, so, I was watching the exchange rate on the internet, I can see the drop, the pound, this dramatic drop to the dollar and immediately I realised how tough it will be for small business,” she explained.

Song whose clothes are designed in the UK but manufactured in China expects she will have to lower her margins to absorb the impact of Brexit. But not everybody is suffering from the falling pound with the drop offering opportunities to some.

“So the exchange rate means for international brands it’s really easy for them to enter the UK market, so more than ever before we’re seeing international companies, international fashion collections wanting to come to the UK to explore opportunities and indeed that means this is our largest Pure London ever,” opined Julie Driscoll, Pure London show director.

Despite Brexit London will always be a jewel in the industry with its own appeal. For some that is a big draw. Take Chloe Chenu for example. This was the first time the French jewellery maker exhibited at the fair and she remains optimistic.

“London is always the place for fashion, the most important in the world, even after Brexit, that doesn’t change anything. We always come to sell products, English people are always eccentric and they want French products,” she explained.

There is a pace and willingness to try new brands in London according to some designers who see the French and Italian markets much slower and more traditional. That makes the UK capital top of the list of places to do business.

“England is an expandable market, it’s forever open to the new idea, to the new brand, and I think that’s what makes it, England, very compelling for us,” said Ece Kavran, designer, Urun.

“Keep calm and carry on” is a favoured phrase of the English when things go badly. So is that the best advice for buyers and sellers who depend on the UK market for their livelihood?

There has been much political talk after the decision to leave the EU and plenty of speculation as to how the fashion industry will be affected, but very few hard facts.

“I think it’s definitely a challenging time, mainly because of the uncertainty more than anything else but I think those people that are doing well are the ones that are really focusing on their customer, focusing on their product and just getting on with it until we know exactly what that (Brexit) is going to mean,” contended Keely Stocker, editor of Drapers magazine.

Fashion is big business in the UK. Consider this: one report compiled by the international trade magazine and website ‘Inside Retail’ put the estimated worth of the sector at almost 59 billion euros per annum.

For some the British weather has its part to play. Bilguun Brower sells high-end Mongolian woolen products in the UK. A cold economic wind may hit the exchange rate in his business but thanks to the cold and damp climate outside his sales are buoyant.