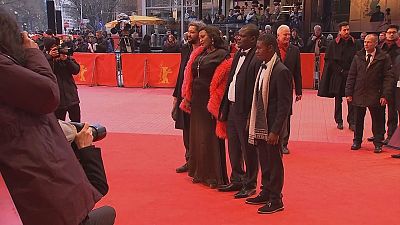 Modern day Kinshasa and the realities of life in the Democratic Republic of Congo. This is theme in the movie ‘Felicite’ which is competing in the Berlin Film Festival.

The drama centres on a singer working in a bar and the life she leads, the problems she encounters. Music is also central to the film.

But the director, Alain Gomes stressed the focus was not just on the struggles which the characters face.

‘‘The film talks about the problems that exist, but it makes very clear that we could build something together. What we wanted to do in this film was to be optimistic, but not optimistic in a naive way but optimistic within the framework of our reality, the difficult realities that we encounter,’‘ he told reporters.

Felicite is played by newcomer Vero Tshanda Beya. The documentary-style film follows her struggle when her son is badly injured in an accident as well as on a new romantic relationship she starts with a troubled mechanic.

The role she says offered her the chance to draw on her experiences while it also affected her deeply.

‘‘I liked this role because I see this kind of thing happening mothers, children – dying, every day in the hospital – that’s what you see in the DRC – it touched me and it hurt to have the scenes in the hospital and I put my whole heart into the film because of that,’‘ the actress stressed.

It has been described as, ‘a raw and realistic portrait’ of modern day Kinshasa with the character Felicite scraping by as a singer.

The movie and the performance of Vero Tshanda Beya is intense and loaded with energy.

‘Felicite’ is one of 18 films competing for the gold and silver bears at the Berlinale which will be presented to the winners on February 18.