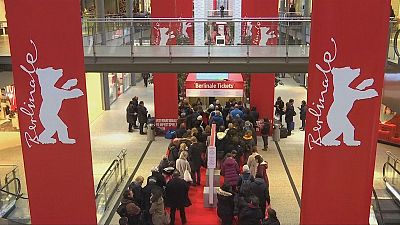 Movie fans arrived early determined not to miss out on tickets for the 67th Berlin International Film Festival – The Berlinale.

The director has already said this years festival will deliver a timely commentary on what he calls the “daily apocalypse” of the modern world – a programme appreciated by fans.

“On the whole they are problem films. We are the ones who have to deal with the loss of our jobs, money and homes whose families are breaking apart. And I think, it’s good to show this on a small scale because it is something we can identify with as an audience,” said movie fan Martina Grotzki.

“It’s my favourite film festival actually. It’s for everyone, it’s like open, it’s not like Cannes or Venice, it’s not highbrow,” added Jeremy Andrew while queuing for his tickets.

“I don’t come here because of Hollywood stars, but actually because of films that don’t have so much hype,” movie fan Miriam Lesch pointed out.

There is a great rush at the main sales point at the Potsdamer Platz Arkaden. Have you already saved your tickets? pic.twitter.com/9qrmNjfe7L

In the ‘Wild Mouse’ George is an established music critic for a Viennese newspaper. Without warning he is made redundant.

He is out for revenge. It is a witty and ironic film that reflects on how a bourgeois life can go awry – and then perhaps manages to get back on an even keel.

The origins of the International Socialist Movement, the emergence of the Communist League and its founding document the Communist Manifesto are central to the theme in the movie “The Young Karl Marx”. It also tell of his meeting with Friedrich Engels.

There is a movie coming out called The Young Karl Marx https://t.co/b7vyU1qTTl

Despite the bloody terrorist attack on a Christmas market in Berlin last December fans seems undaunted about coming to the city.

“I don’t really think there’s anything to be concerned of you know. It’s a film festival everyone who likes movies just comes to watch movies. It shouldn’t be problem,” said Jeremy Andrew.

“Honestly, I’m usually quite cautious but in this case not at all. I believe, whatever happens, happens and I also believe that whatever happens to anybody is predetermined. So if I am hit in an attack here in front of the ticket office – what a pity but at least I was following my hobby,” opined Miriam Lesch.

This year the festival opens with Etienne Comar’s “Django”. It is a biopic about legendary jazz guitarist Django Reinhardt.

The movie is set in France in 1943 during the German occupation. Every night, guitarist and composer Django Reinhardt delights Parisian audiences with his ‘gypsy swing’ music.

Whilst many other Romany people are finding themselves the target of racist persecution and being murdered in concentration camps, Django believes himself to be safe due to his popularity – until agents of the Nazi propaganda machine demand that he goes on tour to Germany in order to counteract the influence of ‘negro music’ from the USA.

Eighteen films will compete in the international competition for the Golden Bear Award.

Renton,Spud, Sick Boy and Begbie have returned in the movie 'T2 Trainspotting'