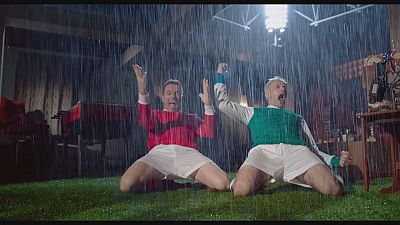 Twenty years have passed. Much has changed, much remains the same. Mark Renton returns to the only place he can ever call home.

This is the movie T2 Trainspotting. And waiting for Renton are Spud, Sick Boy and Begbie. Other old friends are lined up to greet him too – joy, vengeance, regret, diamorphine and self-destruction.

The movie is a sequel to Danny Boyle’s 1996 film, “Trainspotting” and it reunites the original ensemble cast including Ewan McGregor, Ewen Bremner, Jonny Lee Miller, and Robert Carlyle.

In this exclusive featurette, the ‘T2Trainspotting</a>' cast discuss "the complete circus of invention" that Danny Boyle brings to the sequel. <a href="https://t.co/RPKUcEwRnw">pic.twitter.com/RPKUcEwRnw</a></p>— Collider (Collider) January 20, 2017

The hotly anticipated sequel had its world premiere in Edinburgh.

McGregor reprises his role as Renton, a former drug addict in the first film, who now has chosen to revisit his life.

‘‘I was just thrilled to get a chance to play these people again. There’s something about these characters in this film that we feel like we know them, that they are friends of ours or something you know and so to come back to them and find out what they’re up to now is very – it doesn’t really feel like a sequel, we didn’t try and re-make Trainspotting – we didn’t try and do that – Danny’s intention was never to do that so it’s a very different kind of film I think,’‘ the actor opined.

The characters have all changed including Begbie played again by Robert Carlyle.

“Time has moved on for these people and you see these men at different stages of their life and there’s a kind of sadness about that and I think there’s an emotional, an emotional undercurrent in this film. Might surprise people,” he said.

“Trainspotting” also launched director Danny Boyle who went on to win a clutch of Oscars for “Slumdog Millionaire”.

“T2 Trainspotting” is released in the UK and Ireland on Friday 27 January.