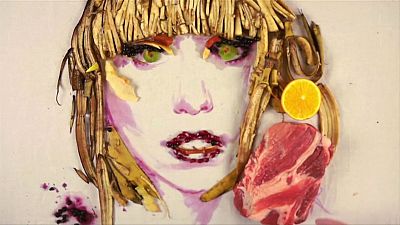 Trump made of dill the latest project by Ukrainian artist Pavlo Bondar, this is no cookery programme, this is art.

Bondar began creating portraits out of food while a child.

He believes Trump and dill go well together:“As for me money has played an important role in Trump’s career. The dill and basically any kind of greenery is associated with money in my understanding,” says Pavlo.
A Vincent Van Gogh painting made of tea and bread and Beyonce made of chocolate, don’t forget to add the eggs.

The artist believes he has many more options with food than paint:
“There are so many foodstuffs. And each of them has not only a specific taste, but the properties and ability to be used for painting and the way they look after drying.”

The problem for Pavlo is food putrifies so Lady Gaga made of fruit and Queen Elizabeth II from oatmeal look great at first, but then……

So, Pavlo films the artistic process preserving his work in moving pictures.