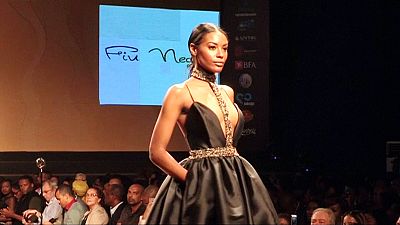 Designers in Africa have seen their craft suffer during an economic crisis which has hit the continent. Many in different countries are wanting to make fashion count as a burgeoning investment market and are looking at agencies to help them achieve their goal, as in Angola.

One strategy is to target exports to other African countries. That’s a tactic on which fashion designer Mzukisi Mbane has set his sights. From his base in South Africa he is looking for new customers across the continent.

“I started with going into Ghana. I did Nigeria. So I am looking at going into Kenya, yes the brand needs to be identified as a household brand in Africa before I can go over to the other side,” he explained.

The community wants to counter lighter and cheaper versions of the blanket that are imported from China and have found their way into the local market. The workshop produces 40 blankets per day, that are sold in supermarkets and has 10 employees.

“We have decided to discourage people from importing textiles. We have discovered that we are capable of producing the blankets ourselves so that we can sell them locally and internationally because we have a permit from the national and county government,” said Gertrude Nalianya from the project.

But again economic woes across Africa have meant the business struggled. The fiscal figures make depressing reading. South Africa’s currency – the rand, for example, fell more than seven percent since the start of 2016.