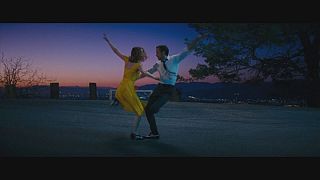 A taster before the main event. The New York Film Critics Circle gather in New York. It is the precursor to the glitz and glamour of the Golden Globes which will be held this Sunday. It’s official the awards season is now up and running.

Congrats to the #LALALAND family on 7 #GoldenGlobes nominations including Best Picture this weekend! Who will be tuning in? pic.twitter.com/q4KrQCukuP

And ‘La La Land’ has started on a high, picking up eight gongs in New York including best film in the critics awards which were held in December.The musical comedy which stars Ryan Gosling and Emma Stone is directed by Damien Chazelle and tells the story of an aspiring actress and jazz musician who fall for each other.

“I think I was just really lucky that the people who came together to make the movie with me were so gifted and helped kind of elevate it so much. The producers, the crew the cast, Ryan and Emma. I was the luckiest filmmaker in the world,” the director said at the awards ceremony.

“Manchester by the Sea,” a poignant and sometimes funny independent movie about a working-class American family dealing with multiple tragedies scooped several awards.

“It’s really nice, there are a lot of people in there who write beautifully about movies and who I’ve been reading for many years. So it’s nice to be in this room and to know that at least a majority of them appreciated the job I did in this movie, if not all of them,” enthused actor Casey Affleck.

“I know that I got to like it about midway through the second draft of the screenplay. I felt like I was on to something good. And then when the cast came together I knew I was probably in very good shape. And then you just kind of try not to mess up,” Kenneth Lonergan explained.

There were also three awards for the biopic ‘Jackie’. Natalie Portman was nominated for best actress.

Mahershala Ali, picked up the award for the best supporting actor for his role in the movie ‘Moonlight’ in which he plays Juan a Miami drug dealer.

It’s reckoned by some the independent film, directed by Barry Jenkins could cause a few surprises at the Oscars while Ali is the clear favourite to repeat his success at the critics awards at the Golden Globes.

“I feel very touched and blessed that I’ve been recognized, but I will always recognize and be conscious of the fact that I was in a remarkable ensemble,” said the actor.

“To have this many people, again, the circle is getting farther and farther away from the people who know me – to have total strangers see this film and see themselves in it when they are not from the world of these characters, it just moves me so much,” remarked Barry Jenkins.

The French actress Isabelle Huppert was nominated in the category best actress but the film in which she stars – Paul Verhoeven’s ‘Elle’ actually won the award for the best film in a foreign language. The actress also stars in the movie ‘Things to come’.

“I did the two films in a row, I did ‘Elle’ first and then I did ‘Things to Come’ and I think both films speak in a very honest way about certain woman’s condition in a very contemporary way. And still also they are entertaining,” she explained.

The New York Film Critics Circle was founded in 1935 almost 10 years before the first Golden Globes awards ceremony. They are also seen as a stepping stone for the Oscars.