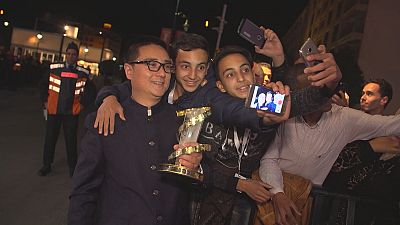 The Golden Star went to ‘The Donor’, Zang Qiwu’s debut film about a poor man who agrees to sell his kidneys to a wealthy man to earn his family’s respect.

“The Marrakech festival is a very influential festival in Africa, the jury comes from all over Europe and the world, and I hope that this award will help boost my career,” he said.

‘Knife in the Clear Water’, a moving portrait about an old farmer who has difficulty giving up his bull for sacrifice in a remote Chinese Muslim mountain village won Best Director.

Unfortunately, director Wang Xuebo who is already working on his sophomore picture, couldn’t be there to receive the award in person. His producer and two lead actors picked up the prize on his behalf:

“We were able to get over the language barrier and receive this prize. It’s truly a great honour for China and we hope we’ll be able to come back to Marrakech in the future,” explained producer Wang Xijian.

Best Actress went to Fereshteh Hosseini who stars in the Irani-Afghan co-production ‘Parting’ about a young Afghani couple risking their lives to find refuge and a better life in Europe.

And finally, Tizza Covi and Rainer Frimmel received the jury prize for ‘Mister Universo’ about a circus lion-tamer in search of his lost lucky charm.

“Each person is a wonderful individual, everyone should understand that, one shouldn’t always just see the bad in people but instead one should also see the positive. I think that would make the world a better place,” said Rainer Frimmel, co-director ‘Mister Universo’.

“The curtain has come down on this 16th edition of the Marrakech Film Festival, one of the leading events of its kind on the African continent, where a multi-national jury chose to shine the spotlight on China – a tribute to the global language of cinema,” reported euronews correspondent Lise Pedersen from Marrakech.