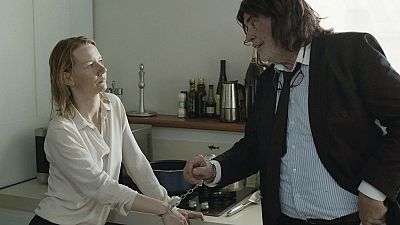 The Italian-French actress Valerie Bruni Tedeschi is among the nominees for Best Actress in the European Film Awards for her performance in the movie “Like Crazy”.

She portrays a patient of a psychiatric clinic who forges a friendship with a new arrival.

She is joined in the list of nominees by Trine Dyrholm. The Danish actress stars in “The Commune” which tells the story of a woman who, with her husband opens a commune in their house to share partners – an ideal that triggers tragedy in their lives.

Isabelle Huppert is one of three nominations in the film “Elle”. Paul Verhoeven is up for Best Film Director while the movie has been nominated in the Best European Film category. Huppert plays a business woman who is raped in her own home.

The film “Julieta” is also nominated in those three categories with Adriana Ugarte who stars with Emma Suárez up for Best Actress.

The two play a complicated mother/daughter relationship with Ugarte who plays Antía abandoning her mother when she turns 18. The director of the Spanish movie is Pedro Almodovar.

Toni gives his name to this German comedy “Toni Erdman”. It has been nominated in all six categories. Sandra Huller is up for Best Actress, Maren Ade is nominated as Best Director and Peter Simonischek who plays the lead role, is amongst the nominees for Best European Actor.

Burghart Klaussner is nominated for playing Attorney General Fritz Bauer in post war Germany. In the movie “The People versus Fritz Bauer” he is is hunting the major organiser of the Holocaust, SS-Obersturmbannführer Adolf Eichmann.

A grumpy old life and the desire to commit suicide. That’s on the mind of “A Man Called Ove”. The lead role is played by Swedish actor Rolf Lassgard. His portrayal of Ove has led to him being nominated for Best European Actor.

We also have Hugh Grant being nominated in that category. He stars in Stephen Frears’ movie “Florence Foster Jenkins” which is set in 1940’s New York.

Hugh Grant could soooooooo win for “Florence Foster Jenkins.” Ya’ll are kidding yourselves if you think he can’t. #FYC

Spanish actor Javier Cámara is also on the nominees list for his acting in a film about friendship and the relationship between two men facing adversity. The movie “Truman” explores how we react to the unexpected, to the unknown, to grief.

Dave Johns is the lead in the Ken Loach film “I Daniel Blake” a role which has him up for Beast European actor. Ken Loach is among the nominees in the Best Director category.

Deserved gongs for Dave Johns and Hayley Squires at BIFA_film</a> awards. My <a href="https://twitter.com/ObsNewReview">ObsNewReview review of I DANIELBLAKEhttps://t.co/C8w11VSRsd

And so to animation films and “Ma Vie De Courgette” which is a French/Swiss co-production. It centres on the story of the life of a boy who befriends a kind police officer after his mother dies and who accompanies Courgette to his new foster home.

“Pisconautas, The Forgotten Children” is about Birdboy and Dinky, two teenagers who have decided to escape from an island devastated by ecological catastrophe. The feature film is based on the original graphic novel of the same title by Alberto Vazquez.

The third animation film nominated for Best Animation is “The Red Turtle”. It tells the story of a man who becomes shipwrecked on a deserted island and meets a giant red turtle.

The winners will be announced at the Polish city of Wroclaw on Saturday. Euronews will be reporting from this major cinema event.