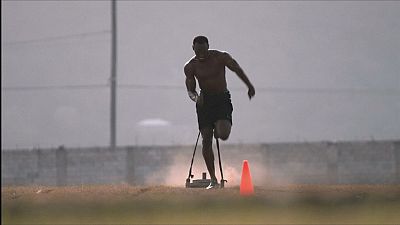 ‘I Am Bolt’ is a new documentary about the athlete known as “the fastest man alive”: Jamaican sprinter Usain Bolt.

We're interested in feel-good movies, you know, you go to the cinema, you want to be entertained and you want to come away uplifted and so he's kind of the perfect subject for that. His achievements in sport are kind of apparent and no one else doesn't ever lose.

Directors Gabe and Benjamin Turner (‘The Class of ‘92’, 2013) followed Bolt around for the best part of two years, capturing the nine-times Olympic gold medallist in training and in competition, as well as relaxing at home with family and friends.

Bolt was joined by a myriad of sports stars, including former tennis champion Boris Becker and athlete Mo Farah, on the red carpet for the world premiere of his documentary, in London.

“I was surprised that the Turner brothers made it really easy for me. It wasn’t any stress. They really came through for me. It was just fun. They became one of the team so quickly because they were just like my team, much relaxed, they liked to laugh, they liked to have fun. So it was really chilled, relaxed. I wasn’t stressed at all,” he said.

‘I Am Bolt’ includes a mix of archival, broadcast and original footage, sometimes shot by Bolt himself as he speaks his thoughts directly to the camera.

The Turners say he was the perfect subject matter for their film.

“We’re interested in feel-good movies, you know, you go to the cinema, you want to be entertained and you want to come away uplifted and so he’s kind of the perfect subject for that. His achievements in sport are kind of unparalleled and no one else doesn’t ever lose. Someone like Serena Williams, who’s in the film, is amazing, even she loses sometimes, but Usain doesn’t lose,” said Gabe Turner.

The 30-year-old has said he plans to retire after the Athletics World Championships in London next August.

Co-produced by Ricky Simms, Bolt’s long-time agent, and his school friend-turned-manager Nugent ‘NJ’ Walker, the film has been mostly warmly received by critics, though some regret the heavy-handedness of what they describe as a gushing homage to the athlete.