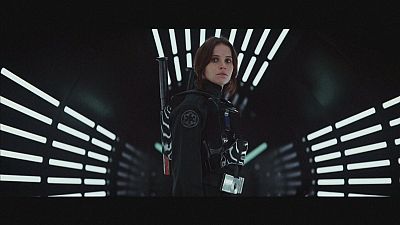 Star Wars fans were treated to the first twenty minutes of the franchise’s latest movie, ‘Rogue One: A Star Wars Story’, at a special event in Mexico City.

Making something like 'Star Wars' is very intimidating (...) and so we were sort of in a battle together, it felt like the characters in the film, we had a camera and we had the actors and we were fighting this war trying to achieve this impossible task of making a good Star Wars movie.

Set just before the very first 1977 ‘Star Wars’ movie (‘Star Wars: Episode IV – A New Hope’), this new tale unfolds as the Jedis are all but extinct and the threat of the Death Star is looming.

Britain’s Gareth Edwards (‘Monsters’, ‘Godzilla’) directed the movie: “Making something like ‘Star Wars’ is very intimidating, there’s a lot of pressure and so we would always joke with each other and mock each other and had a very good, dry, sarcastic sense of humour, and so we were sort of in a battle together, it felt like the characters in the film, we had a camera and we had the actors and we were fighting this war trying to achieve this impossible task of making a good Star Wars movie,” he said.

The film features a host of new characters including a feisty female lead, rebellion soldier Jyn Erso, played by Felicity Jones. She says she very much enjoyed shooting with Edwards.

“He’s a lovely human being, he’s a great director as well and he brings that intelligence and analysis to everything that he does, so we just clicked straight away and with Alan Tudyk, the three of us got on very, very well and we’d often be laughing our heads off… when we were supposed to be quiet,” said the British actress with a smile.

Tudyk, famous for his roles as Hoban ‘Wash’ Washburne in the space western television series ‘Firefly’, plays droid K-2SO. Mexican actor Diego Luna is cast as Captain Cassian Andor: “Cassian is a captain of the rebellion. He’s an intelligence agent, he’s a spy and he’s a very mysterious guy. He’s a man who’s dedicated his entire life to the fight and he’s willing to risk everything in order to achieve great things,” said Luna on the red carpet.

Also starring Forest Whitaker, Mads Mikkelsen, Ben Mendelsohn and Riz Ahmed, the film is expected to achieve between $100 and 150 million on opening weekend, though Disney chiefs don’t think it will match ‘The Force Awakens’‘ gross of $2.1 billion.

‘Rogue One: A Star Wars Story’ rolls out in theatres worldwide in December.