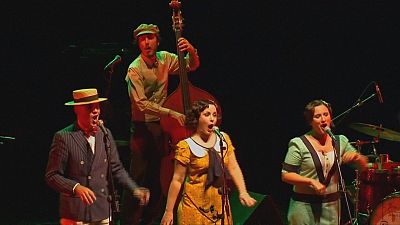 It was sold out for homeland combo O Sister! as their adoring fans packed the house at the Madrid International Jazz Festival .

The Seville-based band led by Paula Padilla is a tribute to popular American swing and dixieland from the 1920s and 30s, and nothing to do with the local musical tradition.

“We are from Andalusia and there when you do something that is not flamenco, you do not have any kind of support. It is very difficult. On the other hand, we see this music is successful and it has its audience,” says Padilla.

‘Stompin’ In Joy’, their fourth album, is the first to include original material.

“Our show has a lot of humor, we like to break the boundaries with the audience so that can explain our success,” she says.

“I’m a jazz musician, right? So I decided to play these country tunes, which I have always been aware of and I’ve been a little bit involved in country music my whole life, just as a fan. And I wanted to take them and play them on the guitar because I love the singers, but also to turn them into jazz.”

Born in Ohio and resident in the New York suburbs, Scofield watched the election of the 70-year-old Donald Trump in despair.

“I think this guy, (Donald Trump), is unqualified to lead a country, any country. It’s a business man and a television…bad television show star. So I’m very sad,” he says.

Scofield has recorded over 40 albums and played along with jazz legends like Miles Davis, Pat Metheny, Charlie Haden, or Herbie Hancock amongst others.

The festival continues until November 30th.