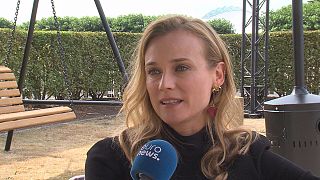 As the US presidential election draws near, Euronews asked celebrities gathered in Deauville for the American Film Festival how they felt about the campaign. Most displayed a clear preference for the Democratic candidate.

A politically-engaged Chloe Grace Moretz called on the young generation to wake up.

US actor and director Matt Ross was in Deauville with his new film ‘Captain Fantastic’, which picked up the Jury Prize. We asked him how he would feel if Donald Trump were elected president.

As a permanent US resident, German actress Diane Kruger cannot vote in the presidential election. She nevertheless has her opinion on the campaign.

“I believe that Americans are not only smart enough but also have their heart in the right place. I cannot imagine that he becomes president. And I think this is a specially ugly election for the United States, you know, I don’t think we’ve ever seen quite such cursing and accusations and dirty works going on. But look, I believe it’s a country that… Let’s not forget, after President Bush and 9/11, they elected the first Black president, you know, so I think it’s a country that is capable of the best as it is capable of the worst, and we’ll just have to see,” Kruger told us.

A jury member at this year’s festival, New York-based author Douglas Kennedy is an outspoken Clinton supporter. He told us the next two months will be nerve-wracking for him.

“If Trump is elected I might have to vote with my feet for a while and go elsewhere, but we’ll see. He genuinely troubles me, he scares me,” Kennedy said. “I think he is the worst kind of plutocrat, he’s a loud-mouth, he is very uneducated, he has no sense of the grayer nature of human discourse or the human condition.”

Presenting their latest documentary in Deauville, French sisters Clara and Julia Kuperberg have devoted their career to American cinema. According to Clara, history has a way of repeating itself.

“Take someone like Ronald Reagan – I’m thinking of Donald Trump, so there is a parallel. He used cinema to get inside American homes, through TV too, he did TV programs, and it’s true that you can see this kind of phenomenon, which you would never see here (in France), you would never see a TV miniseries actor, who plays cowboys and plays around with monkeys, standing for a presidential election. It’s part of the American myth, there’s this notion of hyper-reality, things are staged, nobody minds,” said the film maker.