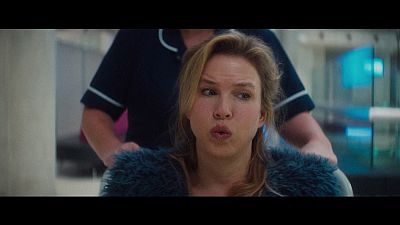 She’s back on the big screen…

And so is Mark Darcy.

But one cannot forget Bridget’s ex, barrister Mark Darcy (Colin Firth), particularly when Bridget finds out that she is pregnant.

Renée Zellweger was all smiles at the film premiere in London, while Colin Firth (Mark Darcy) admitted he had initial doubts about returning as her love.

Zellweger said: “Well, we’re pals off-screen so that probably helps. I think we share a lot of affection for these characters as well, so I’m sure that people will be able to sense that when they see the film.”

Colin Firth explained his doubts about reprising the role of Mark Darcy: “So there’s a part of me that thinks, ‘I’ve forgotten this, don’t remember anything about it, is it relevant? Why are we doing it?’ And then we get in the same room with the same people and you wonder if it’s actually the same day, and no time’s passed at all.”

Comedy ensues as Bridget tries to determine just who the daddy is.

Author and screenwriter and executive producer Helen Fielding spoke on the special connection that is a Bridget Jones film: “At its heart Bridget Jones is about the gap between how we all feel we’re expected to be and how we actually are, and it’s more about like how you relate to your friends.”

Director Sharon Maguire added: “I hope we have more Bridget because she very much reflects my life back at me, and so you know I’m not done yet, so I hope she’s not done yet.”

Bridget Jones’s Baby is a frolicking love triangle that has already been critiqued as “a likeable return”.

Bridget Jones’s Diary was a blockbuster success in 2001 and was followed up in 2004 with Bridget Jones: The Edge of Reason.