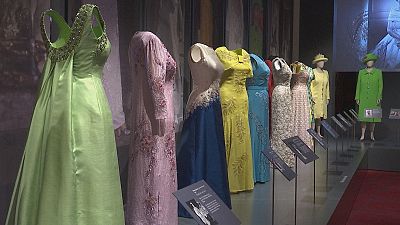 an unprecedented display of fashionable dress from her Majesty's wardrobe

For museumlifestyle</a> <a href="https://twitter.com/WWecker">WWecker writes about three amazing exhibitions about the dresses and the style of The Queen https://t.co/HlSO2PrnZI

Staged at the Summer Opening of the State Rooms at the palace, the display – called “Fashioning a Reign: 90 Years of Style from The Queen’s Wardrobe” includes the British Queen’s famous wedding and coronation dresses, claimed to be among the most important pieces of 20th century British couture.

In celebration of The Queen’s 90th birthday, three special exhibitions will be staged across each of Her Majesty’s official residences during 2016.

#BuckinghamPalaceGardens is vast and I can’t wait to go back – #FashioningAReign is on in #London until 2 Oct 2016 pic.twitter.com/lqJFWUF4sX

In total, over 150 outfits worn by The Queen will be presented across the three palaces, with each special exhibition displaying a selection of outfits chosen because of their close association with the location.

The Queen’s support of British couture and millinery will be highlighted through important pieces created for a world stage by renowned designers, including Sir Norman Hartnell, Sir Hardy Amies and Ian Thomas.

A look at our #summer tour of #BuckinghamPalace & #FashioningAReign exhibit. #Royal#fashionhttps://t.co/5UaPYZeZGApic.twitter.com/yvivY339yH

“In the concept for the exhibition what I really wanted to achieve was an unprecedented display of fashionable dress from her Majesty’s wardrobe, but also to show the way the clothes work for the Queen in her varying different roles as head of the nation, head of state, head of the Commonwealth, head of the Armed Forces, and head of the various orders of chivalry.”

“Fashioning a Reign” charts significant events in The Queen’s life and the nation’s history through an unprecedented collection of dress and accessories designed for these occasions, from her childhood to the present day.

The exhibit also features military uniforms worn by Elizabeth during the Second World War when she served in the Auxiliary Territorial Service.

Elizabeth’s 1947 wedding dress is decorated with crystals and 10,000 seed pearls. Since Britain was still subject to rationing, the then princess had to make sure the materials used for the dress were not overly opulent.

An outfit for every occasion

The exhibit Curator, Caroline de Guitaut talked about her approach to the exhibition:

“So what I kept in mind at all times was wanting to select pieces which represented the decades of her Majesty’s life, as far as possible, but also which are representative examples of the different types of clothes that she needs in her wardrobe so to match my thematic approach. And, at the same time, some of the best examples of British couture, which is of course what they are – there’s some absolutely stunning pieces here.”

Outfits for high-profile family celebrations like the yellow ensemble the Queen wore for the wedding of Prince William and Catherine Middleton at Westminster Abbey on 29 April 2011 are among those on show.

The Queen's yellow coat and dress is by Stewart_Parvin</a> and HM&#39;s straw hat was created by <a href="https://twitter.com/RTMMillinery">RTMMillinery#RoyalAscotpic.twitter.com/OKGm9gq8kJ

The bulk of the exhibit explores the various state visits, ceremonies and events attended over the course of the Elizabeth’s 90 years.

“Fashioning a Reign: 90 Years of Style from The Queen’s Wardrobe” runs until 2nd October 2016 at Buckingham Palace.