At the age of 87, the composer of over 500 scores for cinema and television, is celebrating 60 years as one of the most celebrated musical artists. Morricone, the composer of such classics as 'The Good the Bad and the Ugly' and 'Once Upon a Time in America' has recorded a new album. 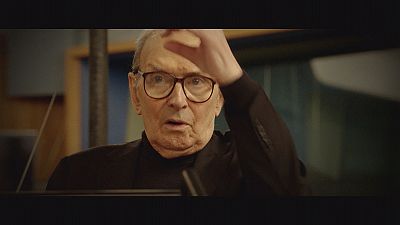 Oscar-winning composer Ennio Morricone is back with baton in hand after recovering from a collapsed vertebrae.

Morricone collaborated with the Czech National Symphony Orchestra for ‘Morricone 60.’
“It’s music for movies. I had several concerts performing soundtracks. One concert was recorded on camera. It was filmed with great audio too, which is very important. The tracks are very important. The orchestra played really well, therefore it was a very good result. I’m happy that Decca is publishing it, so it’s all good.”
Earlier this year, Morricone was honored with a star on the Hollywood Walk of Fame. He has also won the Golden Globe and the Oscar for Original Score Oscar for Quentin’s Tarantino’s film ‘The Hateful Eight’
“It’s satisfying, but what is important is not to think about it. When you’re working you have to think about doing things well, not about the Oscar, the Silver Ribbon or about the Donatello’s David,” said the modest Morricone.
The new album coincides with Morricone’s ‘60 Years of Music World Tour’, which sees the Maestro performing across the globe in a new programme, with over 200 musicians and singers.
Cult