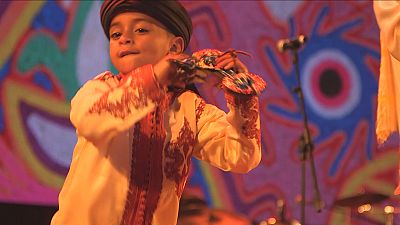 Every year, the Morrocan city of Essaouira beats to the sound of Gnaoua, a rich repertoire of ancient African Islamic spiritual songs and rhythms.

Originating from Western and Central Africa, Gnaoua is considered to be at the root of blues, soul, jazz and even rock and roll. The goal of the music festival is to organise so-called “fusions” between musicians from around the world and Gnaoua music masters, known as Maâhlems.

Among the guests this year was American jazz icon Jeff Ballard, who has played with the likes of Ray Charles and Chick Corea. He and his band jammed with Maâhlem Mohamed Kouyou, one of Morocco’s best known Gnaoua maestros.

“I first found Gnaoua music fifteen years ago and it went inside, you know, something which was very familiar without ever having heard of it before. So, it’s something natural for me,” added Jeff Ballard.

The Jeff Ballard Trio is itself a cross culture band that includes its Californian leader, Lionel Loueke from Benin on the guitar, and saxophone player Miguel Zenón from Puerto Rico.

Backstage, Euronews joined Songhoy Blues, a four-piece band from Mali, who travelled to Essaouira for a special performance with Maâhlem Abdeslam Alikane, the artistic director of the festival.

The band formed in 2012 when Islamic extremists banned music in their home town of Timbuktu and they were forced to flea to the capital Bamako. Its members grew up listening to music by the Beatles, Jimi Hendrix and John Lee Hooker. But their main focus was hip hop and R&B. Asked about the connection between them and Gnaoua musicians, the band’s singer Alios Touré said, “It is natural, it’s the same culture, the same energy, we share the same desert!”

“You know, it’s been a long time since I played with musicians from Mali, but now, Mali has come to us thanks to them,” added Abdeslam Alikane with a smile.

The festival also played tribute to Doudou Ndiaye Rose, the master of Senegal’s traditional drum, the sabar, who died last year at the age of 85. Several of his children travelled to Essaouira to show off the ancient art of drumming.

Neila Tazi Abdi is the festival’s founder and director. She told Euronews’ Wolfgang Spindler: “This is not about showbiz, it’s about celebrating music. It’s a laboratory where music and art merge, where we bring together artists from different horizons. And today, with all the musicians who have come to Essaouira over the past nineteen years, we now have ambassadors around the world who leave this place with extraordinary memories and a powerful experience, and they share this experience, and that’s the best way to give our project artistic credibility.”

Once again this year, the Gnaoua music festival drew tens of thousands of visitors to Essaouira, celebrating the rebirth of a musical genre, which has now made its place on the international music scene.