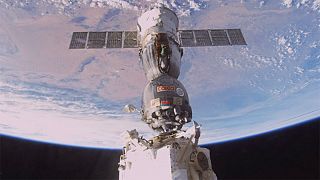 ‘A Beautiful Planet’ is a documentary that offers a fresh and breathtaking perspective of the Earth seen from the International Space Station.

Narrated by Jennifer Lawrence, the film is the work of IMAX veteran Toni Myers.

“I wanted to re-visit a look at Earth from the space station, now that it’s completed and there’s that wonderful viewing platform called the Cupola there. I knew the imagery would be fantastic. I wanted to look at the current state of the Earth now, but I really also wanted to inspire a new generation of kids, who are now the audience, about what a beautiful, beautiful place we have inherited.”

Like for her other films, Myers turned her protagonists, in this case the astronauts, into filmmakers.

“We train the crews for several hours in advance, spread out over months how to be cinematographers and directors, lighting and sound recording, and acting and directing their fellow crew mates in scenes.”

Samantha Cristoforetti is one of the astronauts-turned-filmmakers.

“Especially if you see it in 3D, it really gives you that sensation of being immersed in this environment which is the space station. It’s really like being there. You see it in this gigantic screen in very high resolution and you’re immersed in it.”

Described as a jaw-dropping film that offers rapturously beautiful images of the Earth from orbit, ‘A Beautiful Planet’ has opened to critical acclaim in the US.