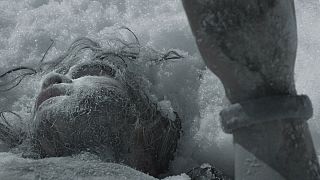 Catarina was born out of an experience with the DNA of a man from the Ice Age. She is the character created by Joana, a young Spanish screenwriter. Or… maybe the story is true, and Catarina and Joana are one and the same person.

This is the plot of ‘Gelo’, a Portuguese-Spanish co-production that opened this year’s Fantasporto International Film Festival in Porto.

Veteran Portuguese director Luís Galvão Teles teamed up with his son Gonçalo to direct the movie.

“Using different languages forced us to be more focused on behaviour and emotions than on linguistic codes. At least, that’s what I felt when shooting with Ivana,” said Afonso Pimentel.

‘Gelo’ had its world premiere at Fantasporto, which has been promoting fantasy, science fiction and horror films as well as auteur and experimental projects from all around the world since it started in 1981. The film opens in Portugal this week (March 3) and should soon hit screens in Spain and other European countries.

Fantasporto wraps up this weekend. Tune in to euronews to find out who the winners are.