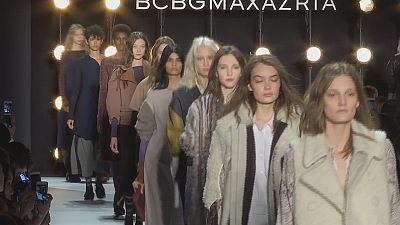 Lubov Azria, the chief creative officer of BCBG Max Azria, said: “We have a bunch of David Bowie pictures and David Bowie through the ages, you know?

“Through his four decades and it’s really not about the fashion, it’s about performance and how being a performer gives everybody hope and beauty.”

Husband and wife team Max and Lubov Azria featured slashed leggings and color-blocked bags in their latest collection. Also prominent on the runway were oversized sleeves and lots of ruffles, albeit in soft, cozy sweaters.

The designers said with their choreographed layers of shimmering knitwear, fur, denim, crepe and embroidered leather – in a rich winter palette of cream, merlot, ink blue and camel they were aiming to show artistic ingenuity.

For his latest collection at New York Fashion Week, the Texan designer, a fan of the true crime genre, said he was inspired by the Netflix hit “Making a Murderer.”

Selman’s playful spirit came through in frilly frocks covered with sparkly fringe, and pops of red and silver metallic under blouses and across slip dresses.