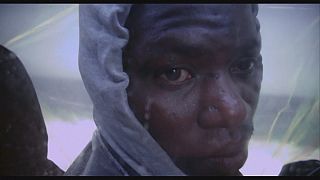 Here we are in Berlin and the discussion on refugees in Germany is very active and controversial.

This year there is a particular focus beyond, simply, film and its fans. With a spotlight on the refugee crisis, the Berlin Film Festival is making an extra effort to welcome refugees, some of whom will even be taken behind the scenes.

Others will be attending in the company of NGO workers and there will be a refugee-staffed food truck serving up Mediterranean fare with the aid of a celebrity chef. The Festival will also be collecting for organisations aiding refugees and asylum seekers.

Without losing sight of its primary goal of presenting the best of world cinema, festival director Dieter Kosslick says that this year’s agenda is also to help explain what refugees face.

Festival director Dieter Kosslick: “Here we are in Berlin and the discussion on refugees in Germany is very active and controversial. We have a lot of movies on the fate of refugees and chose as the title of the festival “The pursuit of happiness” or “The right to happiness”, and that also concerns the refugees…”

Wolfgang Spindler, euronews: “What can a film do for this current situation?”

The news conference of Hail Caesar!, starring George Clooney, turned into a talk about refugees.

“Now in the news media, I think it’s not told enough – certainly in our country (USA)it’s not told enough and not talked about enough. It is unfortunately a political period in our country so we are not talking about a lot of things that are going on around the world but I do believe that, in fact, I am having a meeting with [German Chancellor] Angela Merkel tomorrow to talk about and ask, you know, what messages and what things we can do and what are the things we can help with.”

A competition film this year is Fuocoammare (Fire at Sea) by award-winning director Gianfranco Rosi, who in 2013 won top prize in Venice for Sacro GRA, a film about people living along Rome’s ring-road highway.

This commentary-free doc chronicles the exodus of refugees on the southern Italian island of Lampedusa, where everyday, locals bear witness to one of the greatest humanitarian tragedies of our times.

Over 1.1 million people applied for asylum in Germany in 2015.