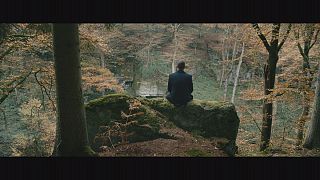 ‘The Dark Side of the Moon’ might be a familiar title for music-lovers, but the name is where the similarities stop.

German director Stephan Rick’s latest film is a psycho thriller about a skilled solicitor. Protagonist Urs Blank is going through a midlife crisis following the suicide of a businessman he has plunged into ruin.

He meets young hippie Lucy and, after tripping out on magic mushrooms, starts losing his grip on life.

The film is based on a best-selling book by Swiss author Martin Suter.

It was translated into more than 20 languages and sold over a million copies in Germany alone.

“There were many different aspects (of the book) that interested me,” said Rick.
“But mainly it was the journey of Urs Blank from lawyer to man in the woods, losing control of his life. I was fascinated by this from the moment I opened the book – with how he is fighting against himself and his aggressive compulsions, which break out more and more often and uncontrollably after his mushroom trip.”

Moritz Bleibtreu plays the lead role – the man who discovers his own dark side of the moon. He escapes to the forest when he finds no one can help him. With a solution drawing nearer, his earlier life begins to catch him up.

“He does things, he doesn’t want to do. But luckily, he has a conscience, which catches up with him,” Bleibtreu explains.
“And from a certain point he knows that there is no more escape for him because of the things he has done. And then it all revolves around his confrontation with evil.”

In an effort to re-find himself, without hurting anyone, Blank decides to flee to the woods in search of answers. But both the police and his vindictive business partner are hot on his heels.

The film is out in Germany, Austria and German-speaking Switzerland.