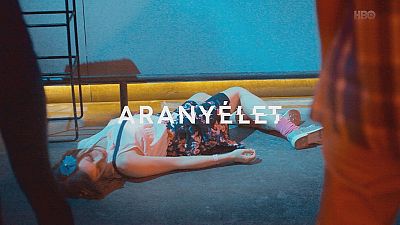 A new television series has been launched in Hungary. Golden Life is the result of HBO Europe’s new strategy to produce original content across Eastern and Central Europe, using local writers and directors.

The eight episodes of “Golden Life” follows the adventures and misadventures of an upper crust family in Budapest.

Zsombor Dyga, the director, explained: “A lot of Hungarian families will recognize themselves, their inner fights, their struggles which they have to face. I hope it will be a familiar and interesting story for many people. Of course we are talking about a very rich family, which isn’t that common in Hungary, but the phenomenon exists. This couple has been cheating for long enough to have achieved that level of wealth.”

Part thriller, part-drama, part social comment, the hero of the story is the father, who yearns to go straight. But his family refuse to give up their fraudulent, criminal activities.

Eszter Ónodi plays the wife: “She is sly, unpredictable, strong-willed, talented and unhappy. That’s the essence of the person I try to portray. I can tell you, she won’t remain negative and manipulative, but I can’t tell you any more!”

Gábor Krigler, the executive producer, said: “We wanted to shoot a story about Hungary today, and we put together an very talented creative team who turned the idea into reality.”

HBO Europe broadcasts in fifteen countries across the continent. Its first drama series was called Treatment, and the second was called Board Game. “Golden Life” is the third series in the format.

The first episode of “Golden Life” will be broadcast on 8th November.

As well as “Golden Life” in Hungary, HBO Europe has recently launched the first episodes of local versions of the popular Norwegian drama Mammon in their own languages, for audiences in the Czech Republic and in Poland under the title “Pakt”: https://youtu.be/v-p542F4×8A?list=PLJNCdrSWvyikOxD5SRy_YzOxhaT8bNVLT.