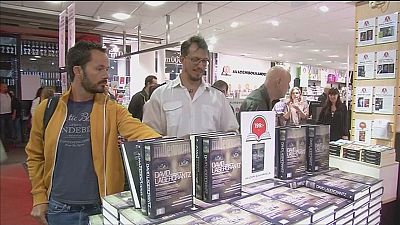 <p>The tattooed young hacker Lisbeth Salander is back in the sequel to Stieg Larsson’s “Millennium” trilogy” but with a twist – a new author – and a contemporary backdrop that includes spies from the U.S. National Security Agency.</p> <p>Swedish author David Lagercrantz has picked up the Larssen torch, whose “Girl in the Spider’s Web” takes Lisbeth into new perils, and has just gone on sale.</p> <p>“I don’t see a problem with a new writer. I think it’s, I mean it’s the development of the story that interests me the most,” said one fan at the book launch. </p> “I want to buy it now during the night when it feels a bit mysterious and I think that if I’m in Stockholm and it happens in Stockholm I have to be here,” said another queuing for a first edition. “(I hope) to recognise the characters, that I will still get a journey, that it will be just as exciting as the first time. I hope,” said another fan. <p>Larsson died from a heart attack in 2004, before the trilogy’s first volume made him a global household name. </p> It was his publishers Norstedts that came up with the idea of a sequel before approaching Lagercrantz who co-authored the autobiography of Swedish football star Zlatan Ibrahimovic, “I am Zlatan”, published in 2011. <p>There has been no messing with a winning formula, as the twin heros are retained. </p> <p>“You know, back in Stieg Larsson’s days, the worst hacking attacks were done by outlaws, I mean a little bit like Lisbeth Salander. Now the worst hacking attack is done by states and intelligence so I suddenly understand, I mean ‘wow’ we live in a world where we need Lisbeth Salander more than ever,” says Lagercrantz.. </p> <p>The rights of the books belong to Larsson’s brother Joakim and father Erland.</p> <p>Both had until now turned down many requests for sequels. </p> <p>“We have had numerous requests (for sequels) over the years and we’ve always said no. But when David’s name appeared we started to think. He writes books that people who don’t usually read books read – just like Stieg,” says Joakim. </p> <p>The books by the late author have sold more than 80 million copies in 50 countries. The first, “The Girl with the Dragon Tattoo”, was filmed then remade in Hollywood with Daniel Craig and Rooney Mara in 2011.</p> <p>The new book is released in 25 countries and has already been translated into 42 languages. The initial print run is for 2.7 million copies.</p>