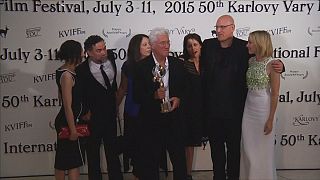 American actor Richard Gere was the guest of honour at the opening ceremony of the 50th Karlovy Vary Film Festival in the Czech Republic.

The 65-year-old, who received the Crystal Globe for outstanding contribution to world cinema from Festival President Jiri Bartoska, was quick to thank the organisers and added he felt deeply honoured to receive this award.

“It is a great honour for me to be presented with this award, said the American actor. ‘‘This festival is very much about filmmakers, it is not so much about the song and the dance and the publicity around it but it seems to be about very serious filmmakers, serious films, actors, writers and directors.”

The festival opened this year with Oren Moverman’s drama ‘Time Out of Mind’, which sees Richard Gere playing the part of a homeless man trying to reconnect with a daughter he abandoned.

Speaking at a press conference, the actor explained how it felt to portray this character.

“I stood on a street corner and I had my hat on, I was a little bit nervous – no one was paying any attention to me. I had a coffee cup and started asking for change. We shot for 45 minutes and no one paid any attention to me. Some people put some money into my cup but they didn’t make eye contact. I think I made about 2 and a half dollars.”

“Time Out of Mind”, which also stars Danielle Brooks and Jena Malone, will be released in September.