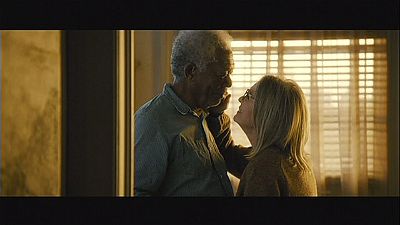 After forty years of marriage Ruth and Alex decide it is time to move out of their beloved Brooklyn apartment because the five flights of stairs they have to walk up to get to their front door are proving ever more difficult.

They need to move to a place with an elevator.

Alex is played by Morgan Freeman and Ruth by Diane Keaton.

“I just think it’s a movie about a great marriage. More than anything it’s the confidence and the security you feel when you’ve made an attachment to somebody for four decades. And I think that’s a remarkable achievement that goes kind of underrated. Marriages now are what, how many marriages end? I mean, more than half, right? In divorce. And yet the concept of marriage is a thing of beauty,”
said Keaton.

The power of the performances and the on-screen warmth between two of Hollywood’s most respected actors makes the film.

Freeman plays Alex, a jobbing artist: “I didn’t have to actually do any painting,” A good friend of mine gave me the real trick to being a painter: Don’t paint. Just mix. I spent a lot of time mixing and then making a couple of strokes, stand back and look. You look great!”

‘5 Flights Up’ is currently on worldwide release.