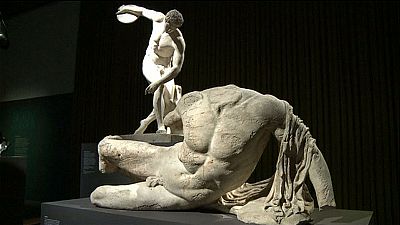 The British Museum in London has a new exhibition examining Ancient Greece’s preoccupation with the body beautiful, and the influence sculptures have had on artists and civilisations, particularly the Romans who often copied Greek art.

A body could be a sign of the stars, or the moon, or the sun, or the waves, or ideas of justice, and revenge or persuasion

The show includes six sculptures from the Parthenon Temple, some of the controversial Elgin marbles, still claimed by the Greek authorities. Thousands of years old, these masterpieces in stone seem almost alive.

“For the Greeks, the body was a sign of their culture and the Greek experience involved representations of the human body in virtually every aspect of what it meant to be Greek. So a body could be a sign of the stars, or the moon, or the sun, or the waves, or ideas of justice, and revenge or persuasion,” says Senior Curator Ian Jenkins.

The Greeks embraced nudity in a way that other ancient civilisations did not . But according to Ian Jenkins, there is an important distinction to be made between naked and nude.

“Naked for the Greeks is an accident when you suddenly find yourselves without your clothes on unintentionally or where you are indulging in some kind of noble lewd behaviour, but nude is an intended costume or uniform that you put on when you take off your clothes and it becomes the uniform of the righteous.”

The exhibition itself contains around 150 objects, including vases, terracotta works and bronze sculptures.

‘Defining Beauty: the body in ancient Greek art’ runs until 5 July at the British Museum.