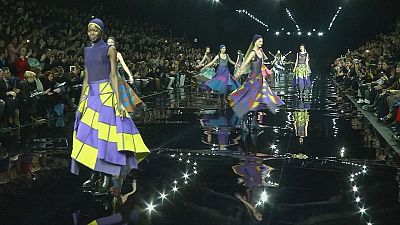 Simons took inspiration from Christian Dior’s own revolutionary use of leopard print in 1947 to give to his collection an animal touch,
work he had already started for his Haute Couture collection in
January.

The Japanese house stuck to a loose silhouette using three
dimensional fabrics to give the collection depth, with colours
including vivid purples, yellows and greens.

The show had a playful edge with the models unfurling tied-up skirts — releasing a burst of colour as the hemlines dropped —
and dancing on the runway to live music performed by Ei Wada.

Kenzo invited the world of fashion to wrap up for a magical wander
through a forest as he presented his latest Autumn/Winter collection at Paris fashion week.

Models sauntered through the shifting landscape draped in fluid
layers of capes and blankets in a collection that breathed mobility.

Graphic jacquards and shearling wraps protected the models from
the winter cold, layered over dresses and trousers in floral prints.

The palette too was drawn from the natural world with forest greens
and sun yellows melting into the metallic trees which skirted round
the runway before and after the show.

Thierry Mugler got creative with computer chips with a monochrome
Autumn/Winter 2015/16 collection that embraced the binary.

Designer David Koma’s collection was full of opposites — black and white, daring yet conservative, thigh-high slits and stiff raised collars,
and was inspired by all things digital.

The Georgian designer was presenting only his second collection forthe established French label after his Spring/Summer debut last
year and the figure-hugging silhouette from spring was back.

Just as last season, he chose to emphasise the sex appeal of
unsung parts of the body with cutouts around the hip and exposed
shoulders.

Angular shapes defined the collection with the contrasting panels of a black and white wrap dress and the squared-off strap of an olive
green leather number.

The week tilted a big nod towards the ‘Game of Thrones’ TV series seen through a kaleidoscope as Manish Arora created a fantasy land of warrior princesses and tribal chiefs in a flurry of pink and gold.

Known as the ‘John Galliano of India’, Arora is well known for his colourful and outlandish designs but he surpassed himself in his latest Autumn/Winter collection with gold breastplates and studded skull handbags peppering a collection full of punch.

One of Arora’s streetsmart heroines went into battle in pink trainers and a feathered Mohawk-style headdress with matching nosepiece, while her sisters-in-arms sported lime green fluffy jumpers embellished with over-sized dragonflies.

Animals were everywhere in the collection from the wolf design on a blue and pink silk dress studded with clusters of crystals, to a pink owl perched on the shoulder of one of the models.

But away from the bright lights, there was a gothic twist with one gold breastplate in the form of a rib cage and a skull motif recurring on numerous pieces throughout the show.