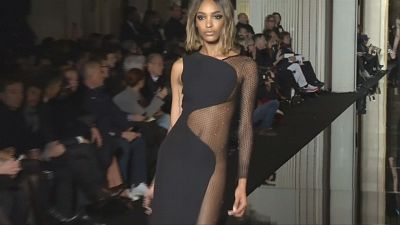 Spring 2015 Couture Fashion Week has opened in Paris with Atelier Versace’s spectacular show featuring radiant colours and suggestive see-through dresses. In the audience, US actresses Kate Hudson and her mother Goldie Hawn added a touch of Hollywood glamour to the show, at the end of which designer Donatella Versace was received with rapturous applause.

Dior Homme has already showed their autumn-winter collection for men, with a fresh approach to evening wear; a stylish suit with snazzy sneakers, flashes of techno-colour and of course doses of denim. The show was the most classically theatrical of the week, with a 37-piece orchestra setting the scene.