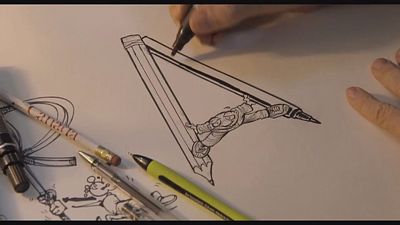 ‘Cartoonists, Foot Soldiers of Democracy’ examines the work of 12 political cartoonists from around the world, who often put their lives at risk to defend democracy.

The film was premiered in the Special Screenings section of the 2014 Cannes Film Festival.

Its director Stephanie Valloatto explains why she made it: “The idea was to show the state of democracy and freedom of expression around the world and we chose cartoonists from each continent, we chose themes – economics, politics, and religion to make links between them.”

Among the cartoonists featured in the film is the Dane Kurt Westergaard, who survived repeated murder attempts as a result of drawing cartoons of Mohammed, and Tunisian Nadia Khiari, whose pen name is Willis. Her work mainly denounces those who have stemmed the revolutionary tide in Tunisia for religious reason or because of their support for the reigning patriarchy.

Chosing such a path has its cost. Russian cartoonist Mikhail Zlatkovsky has been banned from publishing his work since the Brezhnev era. He now works nights as a taxi driver.

“It’s not making fun, it’s more like undressing them, to show them naked. To show the naked truth, the way I perceive it, the way I feel it and understand it. Because in a cartoon, you make your point, this is your point of view, this your opinion,” he says.

Twelve cartoonists from 12 different countries, all of them facing personal risks for expressing their opinions.

‘Cartoonists: Foot Soldiers of Democracy’ is out now.