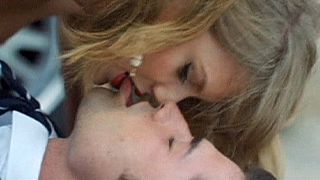 This is the second time the US pop singer has earned the gong, following the success of ‘Fearless’ in 2009.

Featuring 10 original songs including the ubiquitous ‘Let It Go’, the soundtrack of Disney’s hit movie ‘Frozen’ received critical acclaim, including an Academy Award for Best Original Song as well as a Golden Globe nomination.

Britain’s Sam Smith was the third biggest seller with his debut album ‘In The Lonely Hour’.

In the British charts it was a notable year, with all of the top best selling albums coming from homegrown talent – a first since official charts began.

Ed Sheeran topped the year’s bestsellers in the UK with his sophomore album, ‘x’, shifting 1.7 million copies since its release in June – the largest total for an album since Adele’s ‘21’ in 2011.

And newcomer George Ezra came in third with his debut record ‘Wanted on Voyage’, with Paolo Nutini and Coldplay rounding off the UK top 5.