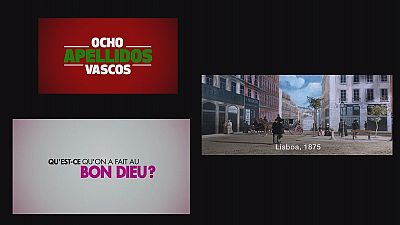 <p>Let’s take a look at some of this year’s box office hits in Europe. </p> <p>The comedy <a href="http://en.wikipedia.org/wiki/Ocho_apellidos_vascos" rel="external">'Ocho apellidos vascos'</a> is Spain’s second most watched movie ever after ‘Avatar’. </p> <p>The story revolves around Rafa, who has never left his native Andalucia. One day he meets Amaia, a Basque girl, who resists his seduction techniques. Against his friends’ advice, he follows her. Ensues a series of misunderstandings which force Rafa to pretend he is Basque as he gets more and more entangled in his own lies.</p> <p>In France, the most popular movie this year was the comedy ‘Qu’est-ce qu’on a fait au Bon Dieu?’. </p> <p>Distributed under the English title <a href="http://frenchmorning.com/en/2014/12/09/serial-bad-weddings-hit-french-film-fail-fly-us/" rel="external">'Serial (Bad) Weddings'</a>, it tells the story of two white, Catholic parents horrified by their daughters’ choice of husbands – three of them have married men from other religions and ethnic backgrounds, including an Arab Muslim, a north African Jew, and a Chinese man. The parents place all their hope in their youngest daughter, only to find out her Catholic fiancé, Charles, is from Ivory Coast.</p> <p>The movie has been seen by more than 12 million cinema-goers in France, and is also a hit in other European countries including Germany. </p> <p>And in Portugal, the most viewed film of the year was <a href="variety.com/2014/film/reviews/rome-film-review-the-maias-scenes-from-romantic-life-1201339123/" rel="external">'Os maias'</a> by Joao Botelho, adapted from one of the greatest classics in Portuguese literature. A family saga, love story and social satyre all wrapped into one, it’s a boldly stylised costume drama about a country’s decline in the late 19th century.</p>