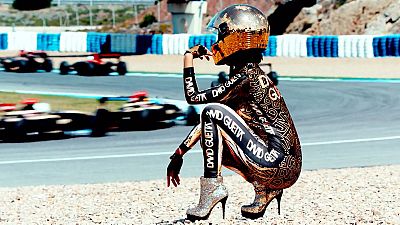 The video of the lead single ‘Dangerous’, featuring singer-songwriter Sam Martin, is more like a short film set on a Formula One racetrack, featuring a duel between Guetta and another rider.

After a year of touring and a messy divorce from his wife and business partner of more than 20 years, Guetta says the album was partly influenced by his private life.

“My previous album was called ‘Nothing But The Beat’ and it was all about like dancing and partying and being sexy, you know, and this is a little deeper. It is, of course, an album that makes you want to dance because I’m a DJ first and I’m a positive person but it’s a little more – my life was not so much a party lately, it was harder on a personal level and I think you can feel it in the album actually,” he says.

He says he is always on the look-out for new talent: “I’m always open to anyone that is talented. It’s the same situation now with ‘Dangerous’ and Sam Martin as what happened to me with Sia at the time with ‘Titanium.’ It’s like, ‘OK, I have all those stars on the album’ but I really feel like ‘Dangerous’ is special and I really want the music to speak for itself.”

While they grant Guetta some credit for "bringing together such a diverse bunch of guest vocalists"=, critics have described the long-awaited album as “lucrative business as usual”=.

For David Guetta fans, ‘Listen’ delivers. The others, reviewers say, ==“won’t be converted”=.