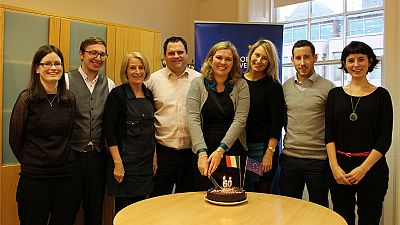 There is a serious impasse nowadays affecting most EU member states. It is not just the result of the economic crisis, but of bad policies, failures in the education systems and a lack of initiatives in streamlining Europe’s response to its youth unemployment problem. In some countries like Greece and Spain, this issue affects more than 50% of young people.

A changing world and a more integrated continent, financially and politically, have brought new opportunities but also challenges for Europe. Yet our educational systems in their majority remain unchanged. There is also confusion about the benefits and opportunities that EU membership offers young people. Often these benefits already exist, but the lack of information makes them inaccessible.

However, there are organisations that are working towards this goal. In Ireland this is one of the main tasks of the European Movement of Ireland (EMI).

Who are European Movement Ireland?

EMI is an independent, non-profit, membership-based organisation working to develop the connection between Ireland and Europe. It recently celebrated its 60th birthday and throughout this time, its vision has been to “discuss European issues in Ireland in a reasoned, robust and fair manner”. (EMI)

EMI runs a number of programmes, competitions and initiatives for young people, such as giving talks to students of all ages, introducing the EU, its history and its functions to the participants. They also provide a weekly email service sending the latest European job and internship opportunities directly to subscribers.

In addition, EM Ireland produces an Education Audit for 3rd level students, which outlines the Europe-related courses available in every college in Ireland. They conduct a series of career talks in universities, Institutes of Technology and third-level colleges around the country to highlight the job and internship opportunities available to students, recent graduates and not-so-recent graduates across the EU.

The organisation works with the Department of the Taoiseach (Irish Prime Minister) on the EU Jobs Campaign, which also aims to increase awareness of employment opportunities available in Europe for Irish graduates. A key part of this campaign is the support applicants receive when turning an application into a job.

On top of this EMI facilitates interviews for Irish students that are interested in studying for a Masters at the College of Europe each year, providing advice on the application and interview process.

Through their work, they are filling a gap that most educational systems in Europe are lacking. Promoting the EU and its functions to young people, while encouraging them to get involved, study abroad and even get internships and further education in EU institutions or universities across the block.

In this way, not only are they offering opportunities to thousands of Irish young people, but they also promote an active and informed EU citizenship among the country’s young generation.

By working and studying abroad Irish youths can develop skills, but also learn new languages that are essential in creating a more multilingual, flexible and dynamic future European workforce.

As Joe Bishop, the Education and Training Officer at EMI points out, a lot is being done through programmes at primary, secondary and third-level education. But more could be done to inform young people about their rights as EU citizens and the opportunities that it offers in a more formalised format.

“The tools are there for them to access all the benefits that EU membership offers, but the challenge lies with spreading awareness of these benefits,” Joe adds. “There are ample opportunities for young people across the EU, but the difficulty is getting them to as wide an audience as possible and making the application process easier,” he continues.

Joe thinks that youth unemployment levels are without doubt an issue. But it is worth informing the average EU citizen that this unemployment is not directly the fault of the EU. On the contrary, within the EU lies a potential solution.

“There is more scope for improving young people’s knowledge of the opportunities that are open to them in areas such as Erasmus+ and Horizon 2020 amongst others,” he mentions.

“Erasmus+ aims to boost the skills and employability of young people, and has a budget of €14.7 billion; a 40% increase compared to previous spending levels, which is a reflection of the importance attached to this area by the European Union,” he says.

Joe believes that the benefits of Erasmus are countless; participants gain valuable experience, approaching education and business issues from another cultural perspective while also improving their CVs.

“More programmes like Erasmus would definitely be welcomed, but the extent to which the new Erasmus+ programme has evolved is a progress,” he adds. It brings together seven existing EU programmes in the fields of Education, Training, and Youth; and for the first time it provides support for Sport.

According to Joe, internships across the EU provide a vital stepping stone into the work force. When applied correctly, they are of massive benefit to employers and interns.

A new EU wide educational system that would teach pupils about Europe, or introduce new modules that would reflect the changing needs of the European economy and job market, would be a positive development. “We need a more formal second level civics subject introduced, with a strong EU module for all schools,” Joe adds.

Yet despite all the shortcomings, there is still hope. “Judging by our young members, the approach towards the EU is definitely positive,” he explains. “Our interaction and research has shown that young Irish people see their future positively and many consider work and study opportunities in other EU countries, especially our closest neighbours, the UK,” Joe continues.

While some young people may be more cynical about many aspects of life today after the crisis, others are more engaged as a result. “They are more wary of false promises in general, becoming involved in discussions and initiatives that they may not have involved themselves in previously,” he mentions.

It is clear that if Europe is serious about tackling youth unemployment while creating a dynamic and competitive job market, it simply needs to collectively and directly invest in its future: Generation Y.

A multilingual, educated and mobile young workforce, with a positive attitude towards the EU and aware of its benefits, will give Europe the advantage in an ever competitive world. But to achieve this, the work that organisations like the EMI are doing must become widespread and a standard across Europe.