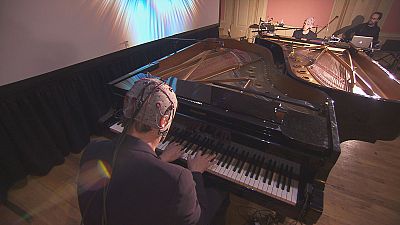 Crouched over their keyboards, the intensity of the moment etched on their faces, two pianists give a free-flowing, improvised performance in a unique event in Geneva.

It is a spontaneous musical dialogue, seemingly placing the performers outside time and space in a world of their own. But what is happening inside their creative minds?

Is there a way to visualise the creativity of their brains and how in sync they are with each other?

The Agalma Foundation in Geneva is seeking answers to those questions in an exceptional experiment bringing science and music together.

Pianist Richard Rentsch explained how musicians’ work together: “I can start something, an idea. Maybe he follows me or maybe not, goes the other way. We know that musically at some point we have to separate and then come back together. It’s really like choreography. We can feel when it’s good, when it’s just right, when we’re together, when we resonate – can we possibly see that?”

“The idea is to record electrical activity with a powerful device that could show an electrical signature of brain activity during creativity,” said Professor Pierre Magistretti, a globally recognised leader in the field of brain energy metabolism.

“The signal we are looking for is very small, kind of adrift in an ocean somewhere,” he added.

The electrical activity in the brain is recorded with an EEG machine. The signals, heartbeat and movements of the pianists are analysed. A screen behind the musicians shows in real time the data mixed with the abstract visualisation of the sound. As electrical activity increases the colour becomes more intense.

“We are interested in trying to understand the subconscious and in particular how it shows itself in the most creative processes, like improvisation, for instance,” said Prof Magistretti.

Professor Francois Ansermet, a leading psychoanalyst involved in the experiment, noted the outcomes are entirely unpredictable: “Every moment can be different. Everything can change. This is improvisation, like the improvisation of the two pianists in this experiment, who are stimulating one another, something develops between the two of them, it’s neither one nor the other, it’s the two at the same time. Are we capable of improvising life like these musicians do with music?”

“I’m listening to the timbre, I associate it with colours, like a painter. These colours could be emphasised by the rhythm. It’s a game, I see it as a game,” added Prof. Rentsch

It is a unique, ambitious and ongoing project. Renowned artists and scientists are working hand in hand to unveil some of the mysteries of the creative process.

“This experiment is also a chance to look at how creativity works in different areas – neuroscience, psychoanalysis and in the arts, concluded Prof Asnsermet: “We have things in common. We all have mysteries and enigmas that we share in these different domains.”