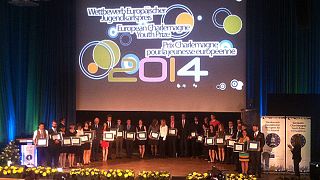 On May, 29 the German city of Aachen hosted the annual International Charlemagne Prize ceremony. This year the award went to Herman Van Rompuy, president of the European Council and former Belgian prime-minister. The event attracted the attention of the media and public figures from all over Europe and was also attended by the prime ministers of Ukraine, Moldova and Georgia.

For seven years, alongside the 64-year-old Charlemagne Prize tradition, the best youth projects and initiatives from all European Union countries have the chance to compete for the European Charlemagne Youth Prize. The prize was launched by the European Parliament and the Charlemagne Prize Foundation as recognition for the contribution of young Europeans in the field of integration and the development of European identity.

This year twenty-eight outstanding youth initiatives were presented in Aachen and the variety of the projects was striking: workshops, cultural exchanges, conferences, festivals of culture, training courses, online-journals, photo-contests, orchestras, choir exchanges and even a model European Parliament. Those were the lucky ones chosen out of 370 applicant groups from across all the member states.

The choice of topics for the projects reflected the current priorities of young Europeans. So it wasn’t surprising when the second and third prizes went to initiatives devoted to youth unemployment. The winner of the 3rd prize was a project called Employment4U by the group Youth Dynamics from Cyprus, whose goal was to increase the employability of young people through numerous workshops, presentations, seminars and discussions in August 2013.

2nd prize went to the Netherlands with the project JouwDelft & Co, which also focused on developing employability. They did this through a youth congress, which aimed at finding solutions to youth unemployment at a local level. Together with motivated young people and professionals in the sphere of employment, JouwDelft & Co created a resolution on fighting youth unemployment, which was later forwarded to the European Parliament.

Certainly it can’t have been easy for the jury to select the winner – all the projects deserved the main prize, but in the end the award went to the Danish project Our Europe. Our Europe was a 12-month long journey through 24 European countries during which the creators, Peter Laugesen and Elena Askløf, met young Europeans to get to know their expectations, wishes, fears, lifestyle and future plans. While travelling Peter and Elena launched Skype-sessions between Danish youngsters and the participants of the project – their goal was to bring European youth closer, to give them a chance to discover more about each other and build a common European identity.

I had a chance to talk to the motivated and passionate Peter Laugesen at the event. After winning such a prestigious award, Peter explained that he and his teammates are going to produce a full-length documentary about their journey. They want to address the problems of generation Y with a new perspective, by showing them in the context of individual life-stories.

When I asked Peter what impressed him most during his trip, the reply was astonishingly simple: “Each time people let us in, it was a pleasant surprise”. Peter also acknowledged that through the project he had learnt a lot about generation Y. He had noticed, for example, that people are still open to dialogue, especially in the places severely stricken by the economic crisis, like Spain or Greece. They wish to talk, to discuss political and social issues, to search for possible solutions. “The situation makes people active and ready for discussion” said Peter.

The 2014 European Charlemagne Youth Prize is a good way of proving wrong all those critics who accuse generation Y of being lazy, self-centred, spoiled and dependent. Yes, we wish for more, but because we can get more. Not persuaded enough? Visit the website of Our Europe and hear the voices of European youth and visit the Charlemagne Youth Prize to learn more about enthusiastic, ambitious and determined young people who are eager to build the future of Europe!

I would like to thank AEGEE-Aachen for giving me and other young journalists the unique opportunity to take part in this extraordinary event and to spread the word about this European spirit.