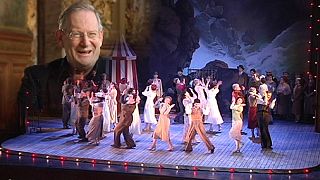 Der Freischütz – ‘The Freeshooter’ - is Carl Maria von Weber’s masterpiece and is considered the model for German Romantic opera. However, it is the French version, adapted by Hector Berlioz in 1841, that was recently put on at the Opéra Comique in Paris. Musically directing the performance is a very English conductor, Sir John Eliot Gardiner.

A close-knit community in 1930s France with a mixture of villagers and fair-ground folk is the setting of the bold revival at the Opéra Comique.

It is the French version that the internationally acclaimed British conductor, Sir John Eliot Gardiner, wanted to work with. We spoke to him during a dress rehearsal.

The Freischütz is the prototype of the German Romantic opera, but according to Sir John there is more to it.

He said: “It’s the struggle between the forces of good and evil. That’s the same metaphysical struggle that occupied all the philosophers of the 17th century, but in a Romantic context, now, believing that music is the true vehicle for expressing poetic emotion. It’s also a fascination with the opposing views about country life. Life in the forest is seen as being benign and beneficent but having a dangerous, almost evil, element to it as well.“

In the French version, Berlioz not only translated the libretto from German into French, but also composed the recitatives, replacing the spoken dialogues of the original version.

Sir John explained how he got around this when practicing: “In rehearsals we would just tell the story in French and then, in order to avoid the pitfall Berlioz talks about of lengthening the recitatives, I would get them to speak the text of the recitatives, watching it on my watch. Then I would get them to sing it, giving them a margin of 10 seconds because the voice takes a little bit longer to sing than to speak. They had to try and keep it within that time frame – and they did doing it beautifully. They sort of brought a lilt and a feeling of narrative flow which gives the whole thing a lot of… piment!“

Inspired by German folklore and music, Weber’s opera is not only a German iconic piece, it is also shaped by Italian and French opera, an influence that Berlioz further enhances and which Sir John commends.

He said: “Berlioz does a fantastically good job. He introduces an element of fluidity and continuity into what otherwise would be a very dry Singspiel. He links it all up together in a most discreet but also very personal way, and his personality is there in the music all the time. By doing it in the French language, you transpose the whole culture of the piece, you bring out the influences of post-revolutionary French opera, you get the sensuality of the French language, and the elegance of that, which is quite different from the lederhosen and Valkyrie atmosphere of the original Weber opera.”