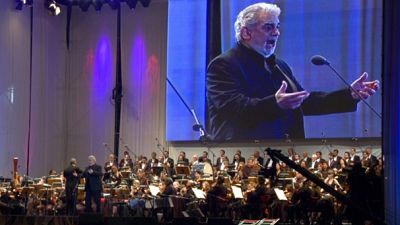 With a career spanning 50 years, 3,500 performances in more than 130 roles, there is no doubting Plácido Domingo’s place in the annals of operatic history. He is an artist who can turn an opera into a pop event. And in Buenos Aires recently more than 120,000 people turned out for his comeback – a three hour show of arias, traditional songs and tango.

“Buenos Aires, and Argentina in general, are very cultivated, musically speaking,” Domingo told euronews. “The Teatro Colón is one of the greatest in the world, and it’s just been refurbished. It boasts a huge tradition, with famous conductors, like Toscanini, and later Kleiber, and also many great singers, like Caruso, or Gigli.”

It has been 13 years since Domingo last performed in Buenos Aires, the city where Carlos Gardel grew up. And the concert paid tribute to that King of Tango.

Domingo also recalled tales of the tenor Caruso who would stop at Teatro Colón while on tour.

“There are stories of how Caruso came to sing here and, while boarding the ship that would take him back to Europe, someone approached him and said: ‘Please stay. We can offer you three more performances!’ Those were days when time didn’t count as much as today, time was something undefined; today we are governed by airline timetables, and unfortunately there’s very little time left for improvising.”

Nowadays Domingo is equally known as a conductor, and he could not resist picking up the baton for the overture of Verdi’s ‘La forza del destino’ which marked his debut in Buenos Aires almost 40 years ago.

And though there are few corners of the world he has not visited, Domingo admits he has preferences.

“I miss Spain, Mexico, and Spanish speaking countries because, there, life is very different,” he said. “I’m quite a punctual, disciplined person, but sometimes a certain lack of discipline can work wonders.

“There are times when everything falls into the right place at the very last minute, when everyone gives their best when it’s almost too late.

“You could say: ‘Plácido, aren’t you keen on accuracy and precision?’ And yes, I do like precision, but the ability to improvise is something I admire. I really admire it, and I wonder: ‘How can they do that when there is no time?! But they do!

“Let’s see if one day I manage to slow down a bit and leave some room to improvise.”

This edition of Musica included extracts from the following works: