Ukraine's military says Russia has been targeting airfields and infrastructure in the south and east of the country to try and stop the Ukrainian airforce from operating effectively.

Meanwhile Russian President Vladimir Putin has declared that "as in 1945, victory will be ours", drawing many comparisons between the Second World War and the conflict in Ukraine on the eve of Victory Day celebrations in Red Square.

Ukrainian authorities fear up to 60 people sheltering in a school in Luhansk region may have been killed in a Russian strike on the building. It comes as leaders of the G7 countries pledged to ban or phase out Russian oil imports to their countries.

**Follow events as they unfolded on Sunday in our live blog below. **

That's our Ukraine live blog for Sunday coming to a close.

We're back early Monday morning with all the latest developments.

The Ukrainian army said Sunday that Moscow was focusing its main efforts that day on destroying airfield infrastructure in eastern and southern Ukraine, in order to prevent Ukrainian air forces from operating effectively.

At least five explosions were heard in the key Ukrainian Black Sea port of Odesa on Sunday, according to reports in local news media. Odesa, Ukraine’s third-largest city and a cultural center of deep significance to both Ukrainians and Russians, has so far been largely spared in the ten-week-old war.

Multiple photos and videos appeared to show trails and clouds of smoke in the sky above the city. Local media also reported that at least one missile had been shot down. As of Sunday afternoon, there have been no reports of casualties, although one newspaper claimed that civilian infrastructure had been damaged.

According to a Facebook post Sunday on the profile of Ukraine’s General Chiefs of Staff, Russia also ramped up “operational and tactical aviation activity” in the northwestern part of the Black Sea.

The Kharkiv regional administration says three people were killed in shelling of the town of Bogodukhiv, about 50 kilometers (31 miles) from the northeastern city of Kharkiv.

Leader from the G7 countries -- France, Germany, Italy, Britain, Japan, Canada and the USA -- held a video meeting with Ukraine's President Zelenskyy on Sunday afternoon. In a statement, they pledged to ban or phase out Russian oil imports to their countries, saying that stopping the flow of Russian oil will cut the main artery of Vladimir Putin’s economy and deny him the revenue he needs to fund the war. 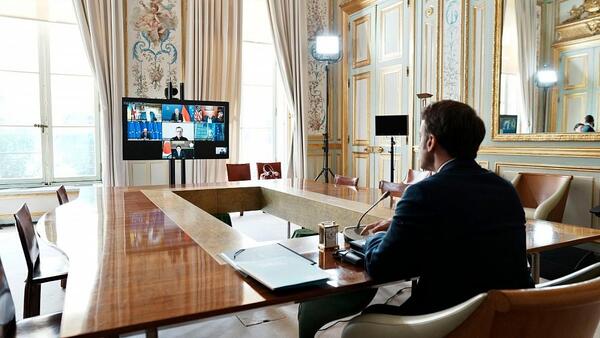 Canadian Prime Minister Justin Trudeau visited Irpin on Sunday, a city devastated by intense fighting between the Ukrainian and Russian armies before its occupation by the Russians in March, the city's mayor announced.

"(Justin Trudeau) came to Irpin to see with his own eyes all the horrors that the Russian occupiers did to our city," Oleksander Markushin wrote on Telegram, accompanying his message with photos taken with Mr Trudeau in the destroyed city.

Justin Trudeau's visit to Ukraine had not been announced in advance.

"The Prime Minister is in Ukraine to meet with President Zelenskyy and reaffirm our unwavering support for the Ukrainian people," his office said.

"We believe in continued cooperation between our countries in the reconstruction of Ukrainian cities after our victory," he said.

Irpin, on the northwestern outskirts of Kiev, was the scene of heavy fighting between Russians and Ukrainians in the early days of the Russian invasion in late February.

The Russian army quickly took control of the town, which had a population of 60,000 before the war, and occupied it throughout March.

Watch the video below: 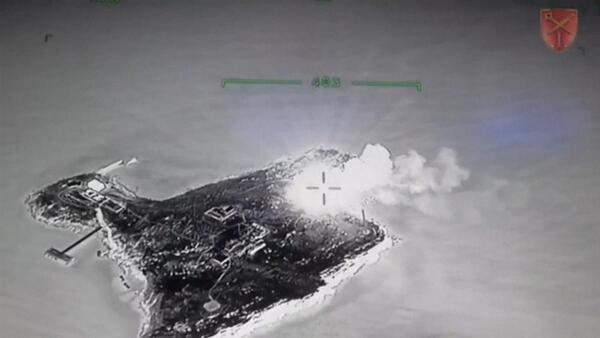 Biden traveled under the cloak of secrecy, becoming the latest high-profile American to enter Ukraine during its 10-week-old conflict with Russia.

“I wanted to come on Mother’s Day,” Biden told Zelenska. “I thought it was important to show the Ukrainian people that this war has to stop and this war has been brutal and that the people of the United States stand with the people of Ukraine.”

The first lady traveled by vehicle to the town of Uzhhorod, about a 10-minute drive from a Slovakian village that borders Ukraine. She spent about two hours in Ukraine.

The two came together in a small classroom, sitting across a table from one another and talking before reporters, before then meeting in private. Zelenska and her children have been at an undisclosed location for their safety.

Read more at our story here.

A museum dedicated to the Ukrainian philosopher Grigory Skovoroda in Skovorodinovka, Kharkiv region, was destroyed by a Russian missile.

Watch video of the aftermath here: 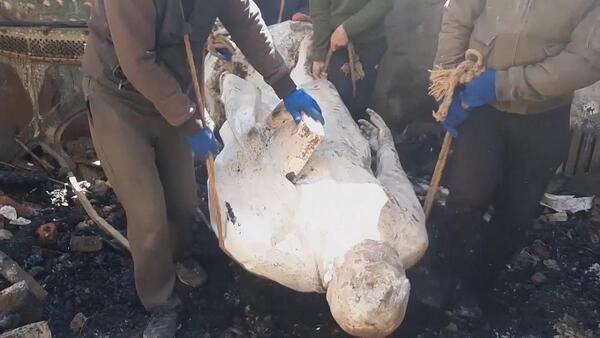 Two of the members of Irish rock band U2 have made a surprise appearance in the Ukrainian capital Kyiv, and played a concert in a metro station.

Bono and The Edge sang some of their biggest hits to the audience who gathered to hear them, and also sang 'Stand by Me' with a member of the Ukrainian military.

Writing on their official U2 Twitter account, the band said: "President Zelenskyy invited us to perform in Kyiv as a show of solidarity with the Ukrainian people and so that’s what we’ve come to do."

Vladimir Putin says: 'Victory will be ours'

Russian President Vladimir Putin has declared that "as in 1945, victory will be ours", drawing many comparisons between the Second World War and the conflict in Ukraine.

He made the comments on Sunday in a message to former Soviet-bloc countries and the separatist regions of eastern Ukraine.

"Today our soldiers, like their ancestors, are fighting shoulder to shoulder for the liberation of their homeland from Nazi filth, with the confidence that, as in 1945, victory will be ours," Putin said in his greetings to former Soviet bloc countries and the separatist regions of eastern Ukraine on Sunday.

"Today, the common duty is to prevent the revival of Nazism, which caused so much suffering to the peoples of different countries," he added, wishing "that the new generations be worthy of the memory of their fathers and grandfathers.

In his greetings, Vladimir Putin also made numerous references not only to the soldiers, but also to the civilians of the "home front", "who crushed Nazism at the cost of countless sacrifices".

"Unfortunately, today, Nazism is raising its head again," the Russian president said, in a passage addressed to Ukrainians. "Our sacred duty is to prevent the ideological heirs of those who were defeated" in what Moscow calls the "Great Patriotic War" from "taking their revenge".

The president wished "all the people of Ukraine - a peaceful and just future".

On Monday, Moscow will commemorate the victory against Nazi Germany with a military parade.

Russia justifies the war launched in Ukraine on 24 February by saying they want to "demilitarise" and "denazify" the country.