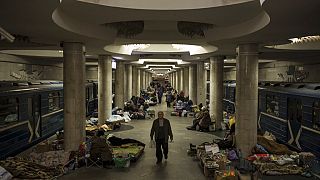 Metro stations have become the home of Kharkiv residents

In Kharkiv, Ukraine's second-largest city, people have been living in the metro for a month due to shellings.

The buildings are destroyed and the streets deserted by the inhabitants. Enemy drones fly over the area - the Russian forces are less than three kilometres away.

The inhabitants of this Kharkiv neighbourhood have been living underground in the Ukrainian metro for a month. They have not managed to flee the city.

Among the people trapped underground are women, children and old people. "Sometimes I go out for a few minutes, but it's safer here," says a woman who has set up a bedroom with her husband.

Those who arrived at the beginning of the war live in underground trains. Long queues form as a local humanitarian association distributes meals.